ANN ARBOR, Mich. - Amid the massive influx of event cancellations, politicians self-quarantining themselves and recommendations to avoid large public gatherings, a chart has made its way across the Internet explaining why those decisions are necessary.

It shows two curves, a talk skinny one and a short wide one. Splitting the two peaks of each curve is a dashed line.

Each curve represents the rate that new cases of a viral disease outbreak are being confirmed. The line represents a city or state's hospital's capacity for treating those patients. Understanding the relationship between those two curves and the line is key to making sense of the measures being taken to combat the coronavirus pandemic. 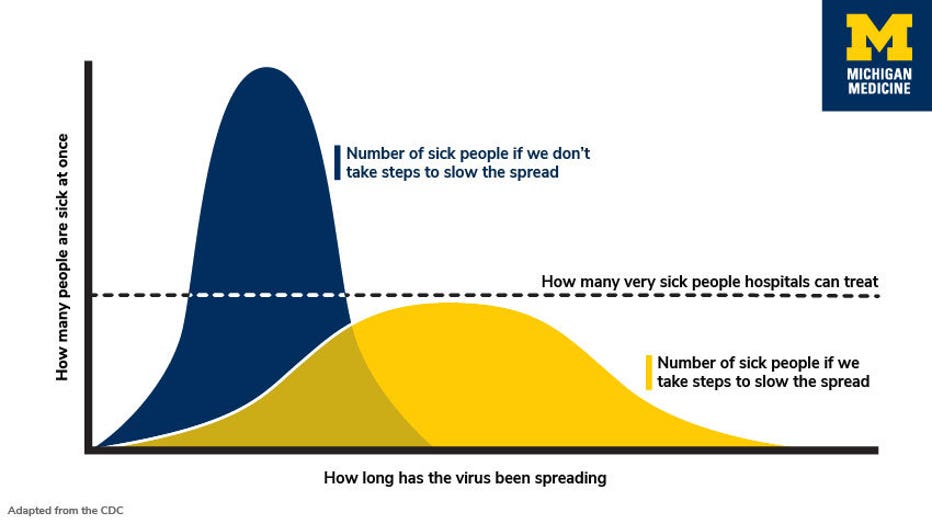 "The tall, skinny curve is bad – it means that a lot of people will get sick at once, in a short period of time because we don’t take enough steps to prevent the virus from spreading from person to person," wrote Kara Gavin, a research and policy media relations manager at University of Michigan's Institute for Healthcare Policy and Innovation. "Most people won’t get sick enough to need a hospital. But those who do could overwhelm the number of beds and care teams that our nation’s hospitals have available."

Southeast Michigan has a lot of big hospitals, from Beaumont to Henry Ford to DMC. However, not every region in Michigan is so lucky and even those hospitals have limit to how many patients they can take. Reducing the speed of the coronavirus outbreak will slow the spread of new cases. That's where the precautions that governments and health departments come in.

All major universities in the state have extended their spring breaks or canceled classes for the remainder of the year. Public museums like Henry Ford and the Detroit Institute of Art are suspending operations open to the public. The NHL, MLB, NBA, MLS have all canceled or rescheduled their seasons.

It might mean more extreme measures earlier on, in hopes of reducing the spread over a longer period of time. In countries like Italy, which are dealing with some of the world's most severe outbreaks of coronavirus, the government has put the entire country under lockdown - requesting all residents self-quarantine themselves and only leave their homes for food or medicine.

RELATED: Track the spread of COVID-19 with our interactive map

The CDC is also advising individuals over the age of 60 and people with chronic medical conditions to "avoid crowds as much as possible," due to that demographic being the most susceptible to coronavirus.

On Tuesday, Gov. Gretchen Whitmer confirmed Michigan's first two cases of coronavirus, one being in Wayne County and the other in Oakland County. Her chief health official followed up saying more positive cases were likely to follow.

Unfortunately, health officials only know the number of confirmed cases because those individuals have been tested. They don't know have an estimation for how many unconfirmed cases are in the state - making it incredibly tricky to know where Michigan falls between the two curves.

That uncertainty points to the necessity for taking precautions now. Whitmer proposed Wednesday that people avoid crowds larger than 100. If people begin to feel flu-like symptoms, stay home and contact their doctor and ask what to do next.

For any Spanish-speaking individuals who would like to read Gavin's explanation, a translated piece of the blog can be found here.