DEARBORN, Mich. (FOX 2) - A shopper at Fairlane pulled out a gun after a man was peeping and touching himself in the women's bathroom Friday.

"This guy looked as if he had heinous things on his mind," said Stacey Crawford.

Crawford says she's been visiting the salon inside Macys at Fairlane mall in Dearborn for the last decade but Friday night she had a repulsive encounter in the women's restroom in the basement.

Alarmed and disgusted, Stacey Crawford of Detroit - still can't believe what she encountered inside Macy's store.

"He was not afraid and it made me feel that he's done this before," she said.

Crawford says she's been visiting the salon inside Macy's at Fairlane mall in Dearborn for the last decade but Friday night she had a repulsive encounter in the women's restroom in the basement.

Crawford was there when she heard another young woman already inside.

"As I was going in, she was wrapping up, I’m in the stall, she's beating on the stall (saying) 'Ma am, ma'am' and I hear the urgency in her voice," Crawford said. "I'm like what's going on."

Crawford said when she opened the stall door she spotted a black man appearing to be in his mid-to late 30s touching himself. He was looking at the other woman who got so terrified - she pulled out a gun.

"She was so afraid she didn't want to do that. She felt threatened," Crawford said.

Crawford and the other woman screamed for security and blocked one of the doors to leave, but the man casually took another way out - through the mall.

"Through Macy's and made it out to the mall - security, no one stopped him," Crawford said.

The two women say they're disappointed with Macy's response to the situation and added that security guards seemed unfazed.

In a statement to FOX 2 - a spokesperson with Macy's says " We are committed to providing a safe and secure shopping environment and ensuring all customers and colleagues are treated with respect and dignity."

Macy's goes on to say that it is fully cooperating with police.

"I'm angry. I'm afraid that no one is concerned enough," Crawford said.

Dearborn police say they were able to pull surveillance video from inside the store but are not releasing it yet, as they work to identify the man.

"When you are going to rhea restrooms check the stalls," Crawford said. "We have to be on high alert at every moment." 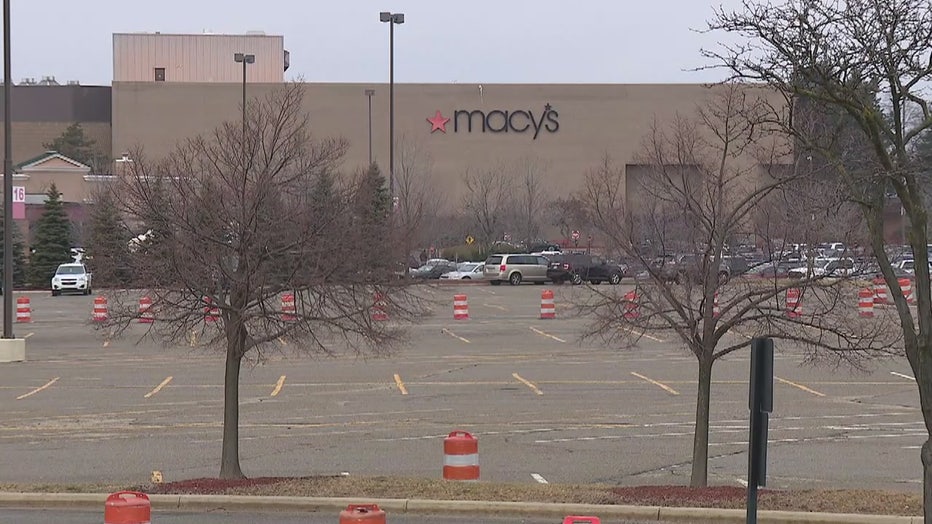