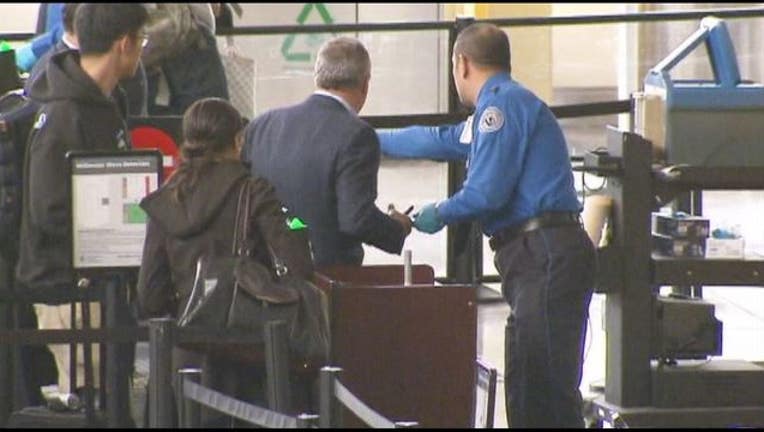 WICHITA, Kan. (AP) - An 82-year-old Texas woman was arrested and jailed for about two hours after she scuffled with a Kansas airport security officer who confiscated an oversized liquid from her carry-on bag, authorities said.

The woman and her husband were trying to board a plane at Eisenhower International Airport in Wichita early Wednesday when a Transportation Security Administration officer told her she couldn't keep the bottle of "liquid hand product" because it was larger than the 3.4-ounce carry-on limit, according to law enforcement and TSA reports. She was told the bottle would only be allowed in checked luggage.

The reports said the woman became angry, walked around an X-ray screening belt into the TSA work area and hit the officer's "right arm with a closed fist," The Wichita Eagle reported.

TSA spokeswoman Carrie Harmon said the security officer found the bottle during a routine search when the woman's bag triggered an alarm. An airport police officer who saw the commotion "removed the passenger from the checkpoint," Harmon said. Airport police authorized the woman's arrest.

Take out your books and chocolate, new TSA rules could be coming this summer

The 37-year-old TSA officer was not injured, according to reports. The woman is 5 feet, 2 inches tall and weighs 120 pounds, according to jail records.

The woman spent nearly two hours in the jail's booking area and was photographed and fingerprinted before being freed, Sedgwick County Sheriff's Lt. Lin Dehning said.

"She was very shaken, embarrassed, and I think the simplest description would be overwhelmed . by the time we got to her," Bennett said Thursday. "She was clearly having a hard time handling the stress of the situation."

Bennett said his staff picked up the woman from the jail, took her to his office and gave her something to eat and some coffee before she was reunited with her husband at the courthouse. The airline drove the couple back to the airport and "got them on the next flight back home," Bennett said.

Jennifer Magana, the city attorney, told The Associated Press that the woman was cited by police for misdemeanor battery but that a decision hadn't been made on whether to prosecute. Messages from The Associated Press seeking additional information from airport police and the TSA were not immediately returned. A spokesman in Bennett's office said he was out of the office Friday.