Family desperate for answers in crash that killed woman

Our FOX 2 camera was at the intersection after the crash. A black Ford Explorer caught fire after impact. Items from inside the SUV scattered all over the ground.

DETROIT (FOX 2) - A mother and son drove up to a FOX 2 news truck while we worked on a different report, and told us about a family member they lost in a car crash overnight. Still emotional — they wanted to share her story.

"They said 'We believe Ceaira got into a car accident.' So I just followed her route to get to her house," said Sandra Westmoreland, her mother. "As soon as I turned on Eight Mile off of Dequindre, I saw all of the lights and the fire department."

Westmoreland says her daughter died in this crash at 8 Mile and Klinger overnight. FOX 2 spoke to the victim’s mother and brother hours later.

"What I’ve seen so far, I went over to survey the scene to see exactly what’s going on. It looked like she jumped the curb and ran into a tree," said Jojuan Westmoreland.

Our FOX 2 camera was at the intersection after the crash. A black Ford Explorer caught fire after impact. Items from inside the SUV were scattered all over the ground.

Detroit police are investigating how this deadly crash happened, and if anyone else is involved. Relatives want answers in the death of a mother and daughter.

FOX 2: "For your 16-year-old granddaughter, what’s going on with her?"

"She’s taking it really hard. I’m trying to be very strong for her," Sandra said.

FOX 2: "What memories do you have of Ceaira during the holidays?"

"We all get together open gifts, wake the kids up at 12 o’clock midnight; especially on Christmas," she said.

The family will have a vigil at Eight Mile and Klinger Tuesday.

Sandra says her daughter would have turned 37 next month and have set up a GoFundMe to help raise money for funeral expenses. 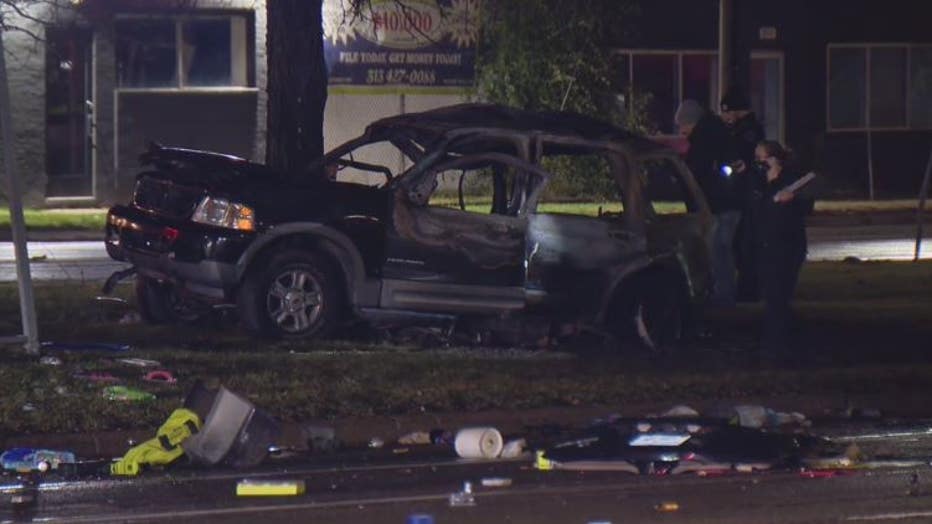