MONROE COUNTY, Mich. (FOX 2) - A Black woman says she was called the n-word and was even face-to-face with a swastika, which the company said they wouldn't remove because "it's a symbol of peace in ancient times."

A Black woman says she was called the n-word and was even face-to-face with a swastika, which the company said they wouldn't remove because it's a symbol of peace in ancient times.

Alicia Harrell is suing Shunli Steel in Monroe County and hired civil rights attorney Jon Marko to file the lawsuit. He said on Tuesday that he was stunned by the things she was confronted with while she worked for the steel company.

"It's some of the most heinous, offensive discrimination that I've seen," he said. "She was subjected to horrible racial harassment by her co-workers."

Marko says his client started working at the factory in September 2019 and was one of the only African Americans working in the facility. He said she was the only woman of color. During that time, he said she was subjected to offensive treatment from her coworkers.

"She was referred to as quote - the maid, a certified broom pusher, was called the n-word,"

Marko says she found a sticker left for her that read 'certified brook pusher' and a note on her car.

He said the harassment extended to her work area inside as well.

Marko says Herrell complained to management but was ultimately told they couldn't substantiate the claims of racist, sexist abuse, and harassment. In fact, he says, their response just made it worse.

"Management informed her that they were going to do nothing about it and in fact they said - look this swastika's not so bad - it's a symbol of peace in ancient times," Marko said.

In August of 2020, she quit her job after less than a year. Now she's filed a lawsuit in Wayne County circuit court, that includes claims for the hostile work environment, race discrimination, sex discrimination, and constructive discharge in violation of the Michigan Elliot Larsen Civil Rights Act

Marko calls it blatant racism - and an egregious attempt to justify it.

"You would expect these types of things to happen in Nazi Germany in the Third Reich - you don't expect them to happen at somebody's workplace in Michigan in 2021," Marko said.

FOX 2 reached out to Shunli Steel for comment on the suit. We have not received a response. 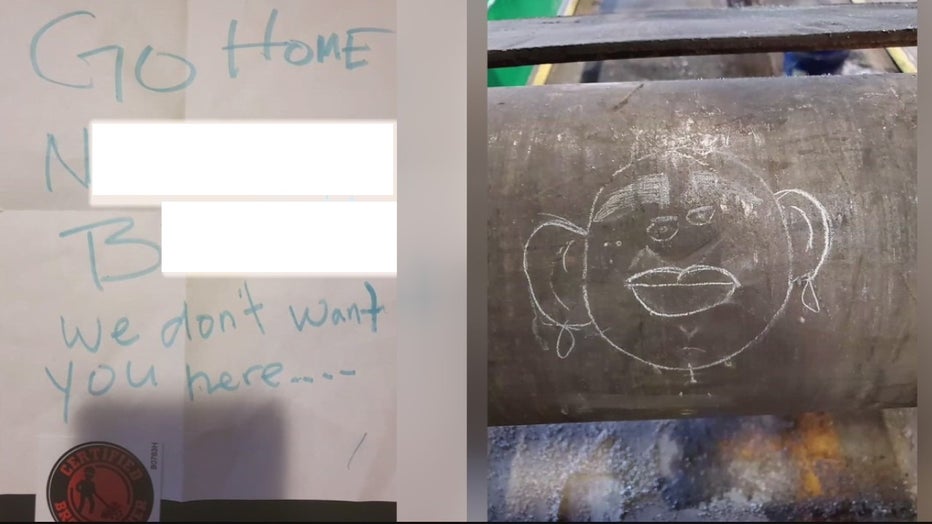 A woman says she was sent this note that reads 'go home n-word b***** - we don't want you here', a sticker that reads 'certified broom pusher', and a crude drawing of a monkey.