"It was so terrifying," Christine Nazareth-Haupt said. "They've never been on the ice; they've never gotten that far from us and you just felt helpless."

Fire dept. rescues brother and sister who slid out onto thin ice

A young brother and sister were rescued by the Shelby Township Fire Department on Martin Luther King Jr. Day after their sled slid too far out onto thin ice.

Christine, her husband and 13-year-old Cayden stood watching sick with worry. Cayden was helping his younger siblings sled on a hill in their backyard on Martin Luther King Jr. Day when the unthinkable happened in just minutes - 4-year-old Cora and 2-year-old Bobby slid a little too far out and got trapped on thin ice.

"I think what happened was the snow has more ice on it because usually at the end of the slope, [the sled] stops. There's never been a time they've even been close to the beach, but this time they passed the beach and slid right onto the ice," Christine said.

Cora and Bobby ended up 25 feet from shore.

Cayden went after them on the ice but fell in. He was able to pull himself out and alerted his parents, who called 911.

Meanwhile, Cora kept her cool and held onto her little brother. 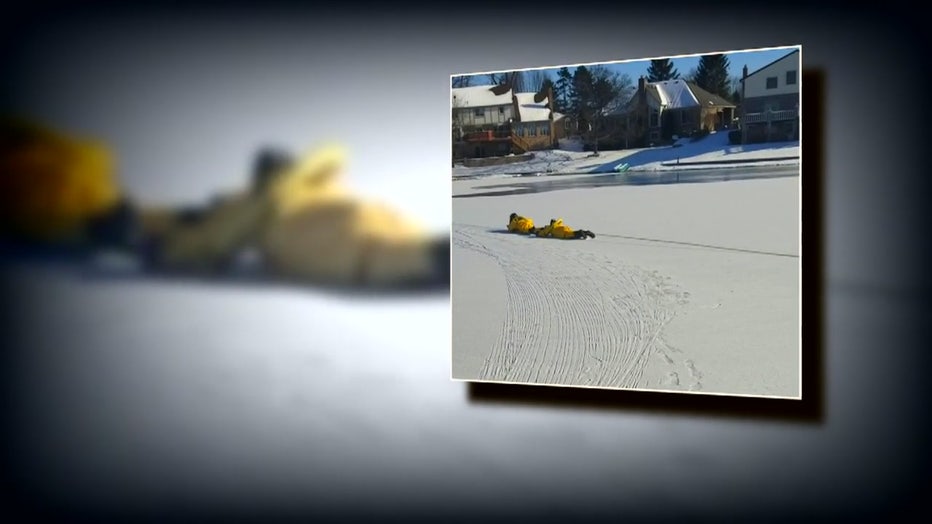 "Bobby was trying to get out and I was complaining and complaining so Bobby can stay right inside and he was wiggling out but he was in my arms, safe and sound," Cora said.

The fire department got there within minutes and rescued the kids before they fell through. A captain believes a couple of things were working in their favor: the kids are light and the sled evenly distributed their weight.

"Everybody was happy nobody was hurt which is a great thing. It was a very happy outcome for what could have been a tragic situation," said Shelby Township fire Capt. Paul Brown.

"Just being prepared and knowing what to do in an emergency and knowing and trusting that you have a great team like the Shelby Township fire department and police department is really helpful for us and our family to know that they have our backs," Christine said.

The captain says if you ever find yourself on thin ice to lie down, which will evenly distribute your weight, and then slowly crawl off.