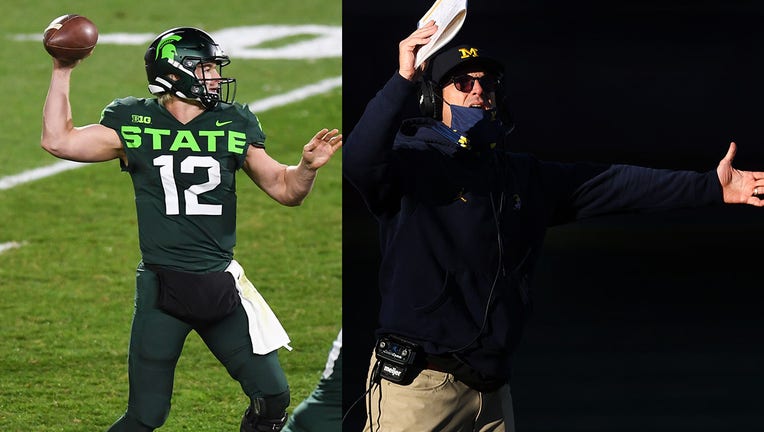 SOUTHFIELD, Mich. (FOX 2) - So that was some kind of extended weekend in the world of football where the locals are concerned. The Lions have been covered in Sunday's column - so let’s get some thoughts out there on what we saw in College Football.

If you found yourself watching the Spartans and quoting Butch Cassidy and Sundance Kid asking “who are those guys?”  Then join the club. I didn’t expect that against Northwestern and I can’t believe you did. I don’t think the Wildcats saw that coming either.

Apparently, all Mel Tucker does is win big games and rivalry games.

That’s what we have on him so far, after victories over Michigan and Northwestern, while watching them look less than impressive against Indiana, Iowa, and Rutgers.

In the end though, if we previously said he had a free pass for a multitude of reasons this year, we will look past the negatives because there have been some terrific positives including Saturday.

Start here. Rocky Lombardi isn’t great, but he is far from incapable. He’s felt the wrath of Spartan critics at times, but you cannot deny that he is tough as nails and flashed every bit of that in their upset win. He only completed 11 passes, but two were for touchdowns, and he showed a knack for keeping drives alive at critical times.

He was clutch with his feet on the drive that produced the go-ahead field goal too,  converting a 3rd and 10 from the 50 with a 12-yard run. He may not be Mr. Right for the long-term but he is Mr. Right Now.

Hats off to the Spartan defense as well - Northwestern was clearly frustrated and 4 sacks, 4 takeaways, and 8 tackles for a loss will do that.  All that included an interception and two fumble recoveries in the fourth quarter when the game was hanging in the balance, including the final scoop and score.  It looked suspiciously like Spartan football out there.  That defense was very strong.

Can MSU find some consistency? We will see. In the end, I just look at this as a glimpse of what Tucker can produce. It’s exciting. There’s plenty of time for more significant judgments down the line when he’s had the chance to operate under some normal circumstances.

Ok. So here’s what we had when we watched Michigan take on Penn State. A matchup between 2 bad teams. We can discuss how they got there - opt-outs, graduation, injuries, and whatever else you want to throw in - but the bottom line is that these two just aren’t very good right now, regardless of their pedigree. (I know, I know. Michigan’s pedigree isn’t what it was. Let’s just move on.)

After a big game against Rutgers, Cade McNamara got the start and struggled. Their running game, even with three backs combining for 163 yards on 24 carries, hasn’t translated into an ability to move the ball up and down the field consistently.

Third down was a nightmare for the Wolverines. They actually stayed on schedule for first and second down most of the game, but 3rd down was a different story. They were 4 for 12 and only three times did Michigan face anything longer than a 3rd-and-5. That’s a lot of missed opportunities.

Defensively, they weren’t very good. Sensing a pattern here? Despite not having their starting running back Devyn Ford, the Nittany Lions rode two freshman backs and a freshman receiver to a big day.

Quarterback Sean Clifford was efficient through the air and did damage with his legs as well at critical times. Michigan gave up 254 yards on 50 carries.

The Wolverines have burned through all their equity this year. Where expectations (albeit misguided ones) might have been high early, they’re gone now.

I don’t know where this is going or how low it may go. There are bigger questions at play here and we will attack those down the road when we get more answers on and off the field.