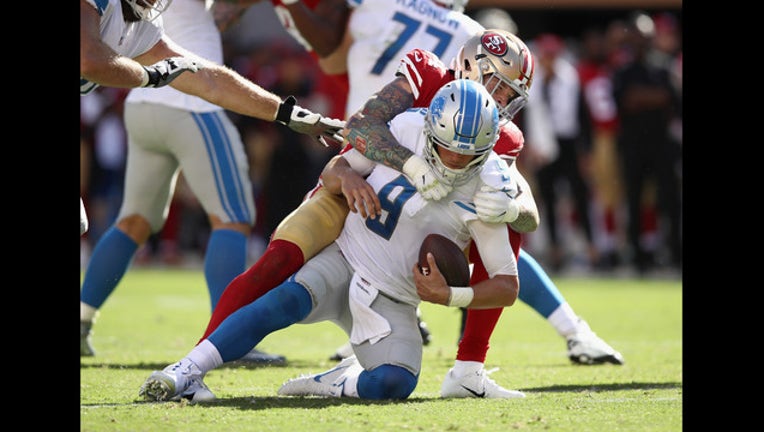 Matt Patricia's coaching tenure in Detroit hasn't gotten off to an impressive start and things look only to get tougher for the Lions following a 30-27 loss to the San Francisco 49ers on Sunday.

Detroit (0-2) dug a deep hole with another rough third quarter and wasn't able to pull off a comeback in part because of a key penalty. Now the Lions will look for their first win under Patricia next week when they host his former team, the New England Patriots.

"It's the NFL. You don't have time to hang your head," defensive tackle Sylvester Williams said.

"We've got seven days. We'll be on the field again in seven days, so no one has any time to hang our head. We've got to get back in there, and learn from our mistakes and come back from them."

Patricia was hired in Detroit after a long run as defensive coordinator of the Patriots. But his team has allowed 78 points through two games after losing 48-17 to the New York Jets in the opener .

But there were plenty of problems across the board for the Lions. There was a breakdown on defense that left Kendrick Bourne wide open on San Francisco's first touchdown. The special teams allowed a 90-yard kickoff return by D.J. Reed to start the second half, setting up the second touchdown for the 49ers.

Patricia mismanaged the clock late in the first half, costing the Lions nearly 40 seconds that contributed to a field goal instead of a possible touchdown.

Then there were 10 penalties for 105 yards, including a hold away from the play that turned a potential game-changing interception into a San Francisco first down and a personal foul on LeGarrette Blount that led to an ejection for coming off the sideline to shove a 49ers player.

Despite all that, Detroit was in position to pull off a comeback late after Stafford threw touchdown passes to Marvin Jones Jr. and Michael Roberts to cut a 17-point deficit to 30-27 with 3:27 to play.

The defense then appeared to come up with the game-changing play when Tracy Walker stepped in front of a pass from Jimmy Garoppolo for an interception that he returned to the San Francisco 7.

But the officials called a holding penalty away from the play on Quandre Diggs, giving the 49ers a first down instead. The defense still managed to come up with a stop, but the offense didn't get the ball back until there was 1:08 to play and the Lions were at their 16.

Stafford moved the ball out to the 39 before three straight incompletions led to a turnover on downs and another Detroit loss. Stafford finished 34 for 53 for 347 yards and three touchdowns .

"The guys we have on this team, the way that we fight, we're never out of it," he said. "I can appreciate that. We just have to make a few more plays, whether it be earlier in the game or later. There's a million plays throughout the game we can clean up and be better, and it starts with me."