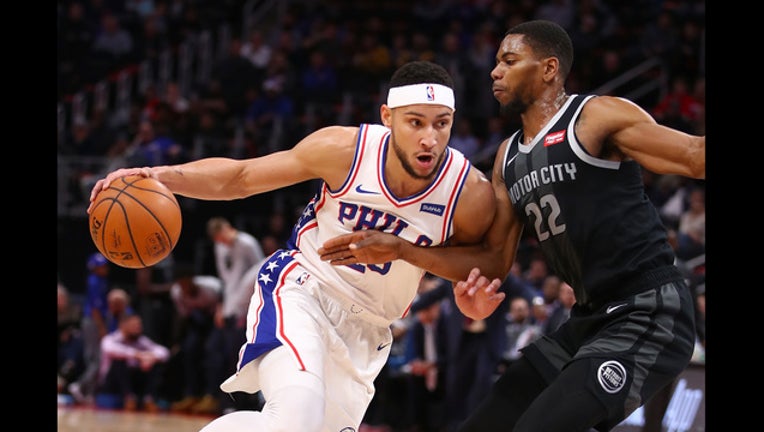 DETROIT, MICHIGAN - DECEMBER 07: Ben Simmons #25 of the Philadelphia 76ers drives around Glenn Robinson III #22 of the Detroit Pistons during the first half at Little Caesars Arena on December 07, 2018. (Photo by Gregory Shamus/Getty Images)

DETROIT (AP) - The Philadelphia 76ers gave their standout center a night off, fell behind by 15 points on the road - and then came back to beat the Detroit Pistons anyway.

"This was our best win of the year under those circumstances," coach Brett Brown said.

Jimmy Butler scored 38 points, and the 76ers overcame Joel Embiid's absence Friday night, rallying from a sizable third-quarter deficit to beat the Pistons 117-111. Blake Griffin had 31 points and 12 rebounds for Detroit, but the Pistons squandered their 15-point third-quarter lead, as well as a six-point advantage in the fourth.

The 76ers rested Embiid, who missed his first game of the season, but Detroit couldn't take advantage of the big man's absence. Butler, who also scored 38 points in a loss at Toronto on Wednesday night, had 26 in the second half Friday, but it was Philadelphia's fourth-quarter defense that stood out.

Detroit shot 9 of 26 from the field in the fourth. The Pistons attempted 33 free throws in the first three quarters, but they took only four in the final period as Philadelphia defended the rim impressively.

"Defense is always going to win games," Butler said. "Especially late in the year, which is what we want to end up playing."

The Pistons were up 100-97 when Detroit coach Dwane Casey received a technical foul arguing a foul call. JJ Redick made the free throw, and then added a 3-pointer to put Philadelphia ahead to stay. The 76ers then ran off another seven points in a row.

Griffin received a technical of his own in the last couple minutes of the game.

Philadelphia had 30 points off 18 Detroit turnovers.

"I like our guys' effort. I like our guys' fight," Casey said. "They're scratching and clawing but you have to take care of the ball. If you turn the ball over against any team in the NBA, you're not going to survive very long."

Griffin scored 50 points in an overtime win over Philadelphia in October, and then had 38 in a loss to the 76ers the following month. He filled up the stat sheet again Friday, but Philadelphia held him to only five points in the fourth quarter.

The teams will meet again Monday.

Mike Muscala scored 18 points for Philadelphia and played key minutes after Amir Johnson fouled out. Muscala had three of the 76ers' 12 blocks.

"I thought defensively, at the end of the game, those last four or five minutes, I thought he was excellent," Brown said. "We needed it all and his versatility, where he can take Drummond away from the basket and make those perimeter shots."