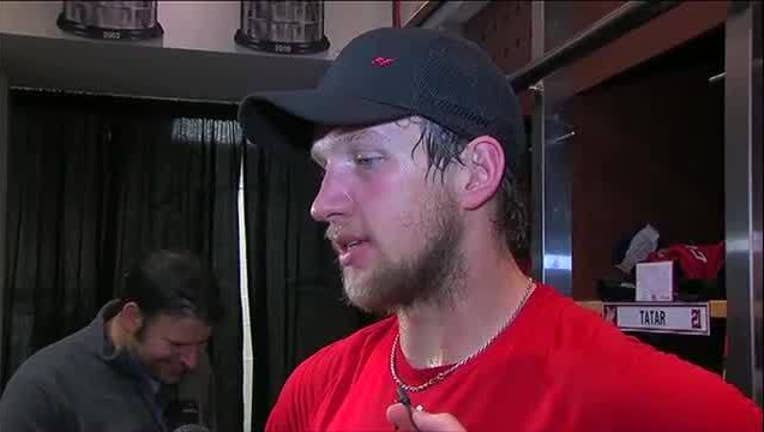 DETROIT (AP) - Justin Abdelkader made sure the Detroit Red Wings didn't have to deal with another loss.

Abdelkader scored the tiebreaking goal late in the third period to lift Detroit to a 3-2 victory over the Winnipeg Jets on Thursday night.

"That's a huge game for us, a huge win," Abdelkader said. "Obviously we know what's at stake, so those are two big points. It's nice not to have to push that to overtime and shootout because sometimes that's a flip of the coin.

"To win in regulation and to get this win, especially after being down 2-0 shows the character in this room, and we have a lot of fight in here."

"Just frustrating when you aren't getting the results like we aren't at the moment," Hutchinson said.

On the go-ahead score, Tomas Tatar intercepted Myers' pass behind the net and passed to Abdelkader in the slot, who shot the puck top shelf for his 17th of the season with 4:36 remaining.

"I thought we showed the type of character we have tonight," Wings coach Jeff Blashill said. "It's a hard league to win in and we found a way to win."

Trailing 2-0, the Red Wings got on the scoreboard when Larkin took a pass from Abdelkader and beat Hutchinson from the right circle at 6:40 of the second period.

It was Larkin's 20th goal, making the 19-year-old the 16th rookie in Red Wings franchise history — and first since Henrik Zetterberg in 2002-03 — to reach that mark. It also snapped an eight-game pointless skid for Larkin.

"It's pretty cool," Larkin said. "It was a goal of mine coming into the year so but for me it's what's next and maybe 25, so there's always more. I want that for myself and for our team to be successful."

Ericsson tied it with 7:35 remaining in the period when his shot from the left circle went off the left skate of Paul Postma in front of the net past Hutchinson. It was the first goal by a Detroit defenseman in 11 games.

Dano opened the scoring at 11:23 of the first, finding himself open in the slot for a one-timer to beat Mrazek. It is Dano's first goal since he was traded to the Jets along with a draft pick from Chicago for Andrew Ladd and Jay Harrison. Dano's last goal was Nov. 4 against St. Louis.

Myers made it 2-0 with 3:29 remaining in the period, maneuvering around Zetterberg in the slot. Mark Scheifele got the lone assist on Myers' goal, extending his point streak to six games. Scheifele has six goals and three assists in that span.

"We weathered the storm and were able to get to goals in the first but we couldn't get one in the second or third," Myers said.

NOTES: Jets D Dustin Byfuglien left the game midway through the third period with an upper-body injury. . Jets F Blake Wheeler played in his 600th career NHL game. ... The Jets wore their home blue jerseys for the first time on the road at the request of the Red Wings, who were wearing their away white jerseys. ... Hall of Famer Bill Gadsby, a former Wings defenseman and coach, passed away Thursday morning at the age of 88 after a long battle with throat cancer. ... Larkin is the third rookie this season to reach the 20-goal mark, joining Buffalo's Jack Eichel and Chicago's Artemi Panarin.