DETROIT - Alec Burks hit a 3-pointer for New York's final points and finished off Detroit with a last-second steal in the Knicks' 104-102 victory over the Pistons on Sunday.

R.J. Barrett led New York with 21 points, Julian Randle had 20 and Burks and Immanuel Quickly had 18 each.

Trailing by two, the Pistons called a timeout to set up a final play with 6.6 seconds left. Killian Hayes inbounded the ball to Cade Cunningham, but Burks stripped the ball as he tried to drive.

"That's Cade's future — he's going to be facing a lot of those situations as he moves forward in the league," Pistons coach Dwane Casey said. "I think he hesitated just a bit and that's when Burks got lucky and stripped him.

"For whatever reasons, he just loves playing in Detroit," Barrett said. "I think the last time we were here, he scored 34 points." 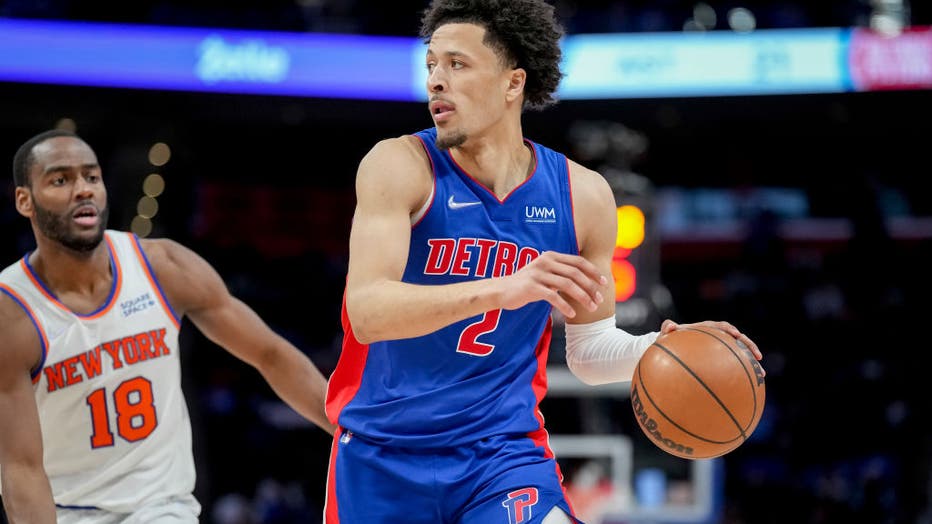 DETROIT, MICHIGAN - MARCH 27: Cade Cunningham #2 of the Detroit Pistons handles the ball against Alec Burks #18 of the New York Knicks during the fourth quarter at Little Caesars Arena on March 27, 2022 in Detroit, Michigan. NOTE TO USER: User expres

"I'm getting a great opportunity here, and I'm trying to make the best of it," Bagley said. "It is so much fun to be playing with guys who understand my game and how to put me in spots where I can succeed."

The Knicks took control early, going up 45-26 on a reverse alley-oop dunk by Obi Topping in the second quarter. They led by 21, but the Pistons regained the momentum after halftime.

"We keep digging ourselves into a hole early in games, and then we have to scratch and claw all night just to give ourselves a chance," Casey said. "I liked the way we played in the last three quarters — we played decent defense and we hit some shots — but we can't play the first quarter like that."

"You have to be prepared to win games a lot of different ways in this league," Knicks coach Tom Thibodeau said. "We had a big lead early, but that dissipated, so we had to win it again down the stretch."

Bagley dunked over Randle and made a free throw to pull the Pistons to 99-96 with 2:09 left, and Saddiq Bey made two free throws to make it a one-point game with a minute left.

Burks's 3-pointer made it 104-100, but Hayes cut the margin in half with a layup. Barrett's fadeaway jumper missed, and Bey grabbed the rebound to set up the final possession.

"That's a really tough basketball team," Mitchell Robinson said. "I know they don't have a great record, but they are young and they fight you every step of the way."

Pistons: Cunningham moved past 1,000 points in the first half of his 59th career game. The first overall pick last summer is averaging 17.1 points.

Pistons: At Brooklyn on Tuesday night.