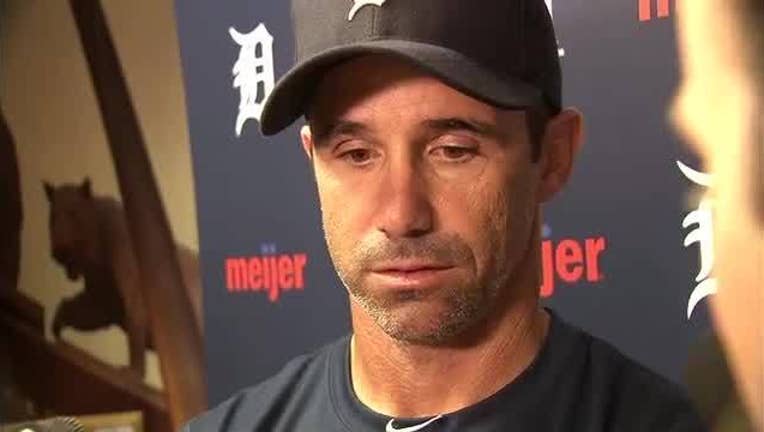 OAKLAND, Calif. (AP) - Even though they're still three games under .500, the Oakland Athletics are feeling a lot better about themselves after their second consecutive ninth-inning rally against Detroit closer Francisco Rodriguez.

The Tigers are a different matter. Now manager Brad Ausmus and his staff are contemplating a change at the back end of the bullpen.

Ryon Healy hit a two-run homer to cap a three-run ninth against Rodriguez, and the A's came back for the second straight day to beat the Tigers 8-6 on Sunday.

"I think momentum absolutely carries over," said Oakland second baseman Jed Lowrie, whose double off Rodriguez tied the game. "When you're playing well you show up to the park the next day and there's a different energy in the clubhouse."

Healy's game-ending heroics came less than 24 hours after Adam Rosales hit a two-out, two-run single off Rodriguez in the ninth inning to beat the Tigers.

Sunday's loss marked the fourth blown save this season for Rodriguez, the 35-year-old right-hander whose 437 saves are fourth all-time.

"Totally embarrassing," Rodriguez said. "I just hope they don't give up because I don't want to be judged for the last 10 outings of my career for what I've done for 15 years. I'm confident that I'm going to bounce back."

Ausmus said Rodriguez's role will be a topic of discussion for his staff.

"It's something he's done for decades so I think it's pretty obvious it's not the same Franky," Ausmus said. "We're going to have to have a discussion. He certainly has earned a degree of respect with his performance over the years, including what he did for us last year. It's not as simple as people like to think it is."

Rajai Davis drew a leadoff walk from Rodriguez (1-4), and Lowrie lined a tying double to the gap in left-center. After Khris Davis lined out to left field, Healy hit a towering home run to left on a 1-0 pitch.

Yonder Alonso homered for the fifth time in six games for Oakland. It was Alonso's ninth home run this season, tying his career high set in 155 games in 2012.

Trevor Plouffe added two hits and an RBI to snap a 3-for-30 funk. Santiago Casilla (1-1) retired three batters for the win.

"It just seemed like it was a total team effort," A's manager Bob Melvin said. "We can't rely on one or two guys. You have to get contributions on all ends of it from us, and we did."

James McCann put the Tigers ahead with a two-run homer in the sixth.

Miguel Cabrera and Victor Martinez each added an RBI single, and Dixon Machado had two hits and two runs for Detroit.

Melvin had the worst success rate in the majors on getting calls overturned by replay this season and was 1 for 6 before winning a challenge in the second inning. Justin Upton reached on Rosales' throwing error from shortstop and quickly tried to steal second base. After Upton was ruled safe, Melvin asked for a replay challenge and the call was reversed.

Tigers: OF J.D. Martinez (mid-foot sprain) will continue to play with Triple-A Toledo but could rejoin the big league club by the end of next week, Ausmus said. ... OF JaCoby Jones ended his rehab assignment but remains with Toledo.

Athletics: Melvin said it's possible pitcher Sean Manaea (strained left shoulder) will come off the disabled list after making a start for Triple-A Nashville on Tuesday. The left-hander has been making steady progress and is using the game as a final tuneup. ... Josh Phegley (concussion) flew to Arizona before the game to join extended spring training. ... Oakland reliever John Axford (strained right shoulder) threw 31 pitches in a bullpen session and will face hitters on Wednesday.

Tigers: Following an off day, Detroit begins a three-game series Tuesday at Arizona. RHP Justin Verlander (2-2) has a 1.84 ERA in two career starts against the Diamondbacks.

Athletics: RHP Kendall Graveman (2-2) faces the Angels for the third time this season on Monday in the opener of a three-game series at the Coliseum. Graveman is winless since coming off the disabled list April 27.