NEW YORK - Bryce Young didn't just meet the standard set by the star quarterbacks who preceded him at Alabama, he exceeded it.

Young became the first Crimson Tide quarterback to win the Heisman Trophy on Saturday night, making Alabama the fifth school with consecutive winners of college football's most prestigious player of the year award.

Young has passed for 4,322 yards and 43 touchdowns this season, leading No 1 Alabama to a Southeastern Conference title and a spot in the College Football Playoff. The defending champion Crimson Tide will play No. 4 Cincinnati on Dec. 31 in the Cotton Bowl. 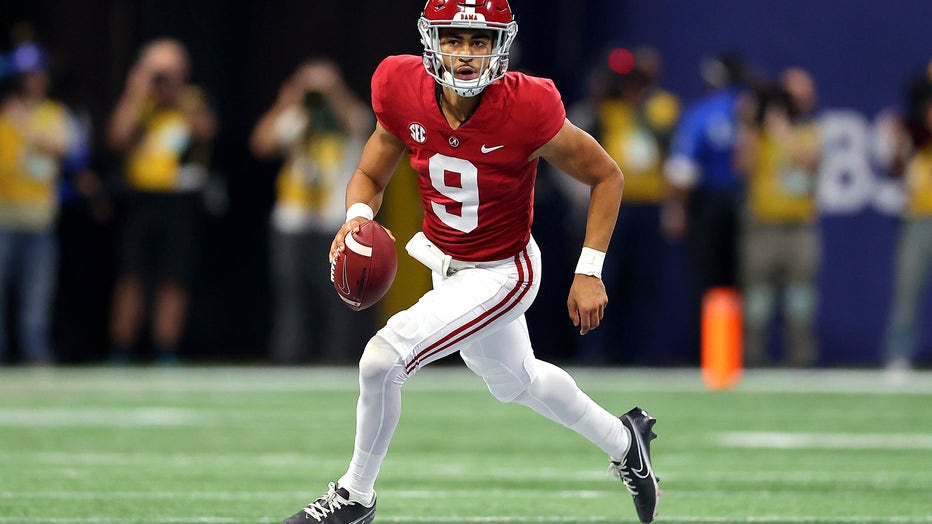 ATLANTA, GEORGIA - DECEMBER 04: Bryce Young #9 of the Alabama Crimson Tide looks to pass in the second quarter of the SEC Championship game against the Georgia Bulldogs at Mercedes-Benz Stadium on December 04, 2021 in Atlanta, Georgia. (Photo by Kevi

Young is Alabama's fourth Heisman winner, all in the last 13 years under coach Nick Saban. Only four schools have won more: Notre Dame, Ohio State, Oklahoma and Southern California each have won seven.

It seemed only a matter of time before a Tide quarterback took one home. Saban’s Alabama dynasty has evolved into QB U.

Young, a sophomore, stepped into the starting role held by Mac Jones last year and Tua Tagovailoa the two seasons prior. Both are starting in the NFL after being selected in the first round of the draft.

"I have a tremendous amount of respect for the great quarterbacks that have played here before me and that’s something that I don’t take lightly at all," Young told AP earlier this week.

Tagovailoa was the Heisman runner-up to Oklahoma’s Kyler Murray in 2018 and then finished 10th in the voting in 2019, a season cut short by injury.

Jones put up even better numbers than Tagovailoa in 2020, but settled for third in the Heisman voting behind his favorite receiver, Smith, and Clemson quarterback Trevor Lawrence.

Young showed immediately he was up to the task. He threw for 344 yards and four touchdowns in his starting debut against Miami to begin the season, but it was the way he finished that won him the Heisman.

The race appeared mostly up for grabs heading into November. Michigan State’s Kenneth Walker, who finished sixth, Stroud and even Young’s teammate, Anderson, all briefly surged to the top of the leader boards.

Young led Alabama on a 97-yard, game-tying touchdown drive in an overtime victory against Auburn on Thanksgiving weekend, shaking off what was overall one of his poorest games of the season to deliver when it mattered most.

"That’s just always been there," his father, Craig Young, said earlier this week. "It’s just been the ability to stay calm within chaos and not perceive it as chaos."

Bryce Young followed up that clutch performance in the Iron Bowl with a masterpiece from start to finish. Young passed for an SEC championship game record 421 yards and the Crimson Tide tore up Georgia’s vaunted defense in a 41-24 victory.

The Heisman race went from wide open to done deal as Young helped Alabama pass yet another milestone with the greatest season ever for Tide quarterback.