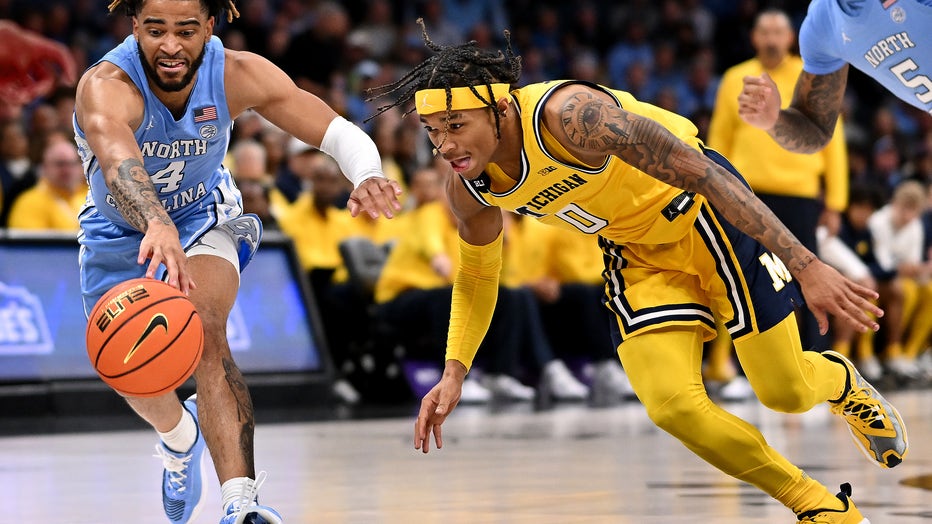 CHARLOTTE, NORTH CAROLINA - DECEMBER 21: R.J. Davis #4 of the North Carolina Tar Heels battles Dug McDaniel #0 of the Michigan Wolverines for a loose ball during the first half of their game at Spectrum Center on December 21, 2022 in Charlotte, North

Bacot scored inside, Love followed with a 3-pointer and Bacot converted a three-point play that gave UNC the lead for good with 4:09 left in the first half. Davis added two 3s, the latter of which capped an 18-4 run that made it 41-32 with 59 seconds remaining.

Davis hit a 3-pointer before Pete Nance was fouled as he threw down a dunk and made the and-1 free throw to give UNC an nine-point lead with 5:45 to play. The Wolverines scored 11 of the next 15 points — including 3s by Joey Baker and Terrance Williams II — to trim their deficit to 73-71 when Bufkin made a jumper with 1:23 to play. Davis answered with a runner off the glass 34 seconds later and Michigan got no closer.

North Carolina hits the road to resume ACC play at Pitt on Dec. 30