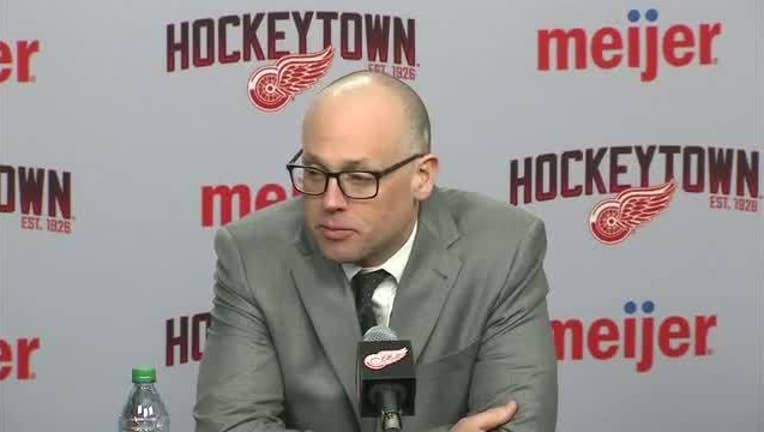 ST. LOUIS (AP) - Ivan Barbashev's parents and younger brother traveled from Russia to watch him play for the Blues on Thursday night. The 23-year-old center made the long trip worth it - and in a big way.

Barbashev recorded his first career NHL hat trick to lead St. Louis to a 5-2 win over the Detroit Red Wings.

"It feels great," Barbashev said. "It's their second game here to watch me. It was unbelievable."

Oskar Sundqvist and Pat Maroon also scored for the Blues, who have points in their last four games. Rookie Jordan Binnington made 20 saves, improving to 19-4-1.

The win gave the Blues 86 points as they attempt to hold on to third place in the Central Division over Dallas, who lost at Colorado and has 82 points.

Thomas Vanek scored twice and Jonathan Bernier made 19 saves for the Red Wings, who had their two-game winning streak snapped.

Barbashev gave the Blues a 2-1 lead, poking home a loose puck amid a scramble in front of the Red Wings' net, at the 3:22 mark of the second period.

"I thought our first period wasn't really good, but the second and third we just started playing better," Barbashev said. "We played physical. It was a lot of fun to be out there."

Barbashev made it 3-1 less than two minutes later, starting the play with a hit on the Red Wings' Michael Rasmussen that jarred the puck to Alexander Steen. The Blues forward gave it right back to Barbashev, who punched in a rebound off of his initial shot.

"We talk to Barbie about being a power forward more," Blues coach Craig Berube said. "Banging and crashing, getting to the net and scoring dirty goals around the net. He's capable of that stuff."

Vanek's 15th of the season got Detroit back to within one, but Maroon's goal midway through the third period gave St. Louis a two-goal lead again. Maroon has scored in four straight games.

Barbashev completed the hat trick with an empty-netter with 48 seconds left.

"He's worked extremely hard, a great guy, you saw the reaction on our bench, everyone's pumped for him," Steen said. "It was a nice touch to see him get three tonight."

Vanek gave the Red Wings a 1-0 lead at the 2:05 mark of the first period, banging in his own rebound off of Binnington's pad. It was his first goal in five games.

"He competed extremely hard tonight," Red Wings coach Jeff Blashill said of Vanek. "He was one of our best forwards, him and Taro (Hirose) probably. He comes. He competes hard every night."

Sundqvist evened the game for the Blues with 8:14 remaining in the opening period, scoring on a quick shot from the slot after being set up by a no-look pass from Michael Del Zotto from the corner. Del Zotto, acquired from Anaheim at the trade deadline, has assists in three straight games.

"They've got four guys in the rush the whole time, and they create a lot of offense through the back end," Red Wings defenseman Niklas Kronwall said of the Blues. "They're a good team."

NOTES: Blues LW David Perron had an assist on Sundqvist's goal to extend his streak to 17 consecutive appearances with a point, becoming the first Blues player to do it since Brett Hull in the 1991-92 season (25 games). ... Red Wings F Jacob de la Rose (accelerated heartbeat) returned to Detroit and is expected to miss the rest of the team's five-game road trip. ... Steen had three assists to give him 601 career points. ... Red Wings D Trevor Daley (back) will likely miss the rest of the season.