The best running back in NFL history, the Lions GOAT, has posted three very odd videos since 5 p.m. Monday.

It started with a puppy chewing its way out of an orange Nike shoebox, with a little music in the background. The 20-second video is a slow zoom out of the puppy and ends with Barry Sanders' Rookie of the Year 30th anniversary logo.

Sanders was elected rookie of the year in the NFL in 1989.

Then, around 10 p.m. last night, he was at it again. This time with an NFL ball sitting on the floor and at least four puppies sleeping and playing in the background.

Again, the video is about 20 seconds long and ends with the logo.

The most recent on posted went up a little before 11 a.m. Tuesday and shows a replica Lions helmet from the 1980s with the same puppies knocking it off the table.

The video ends with the same logo.

What does it mean? What does the 30th anniversary of his rookie of the year have to do with puppies? Well, the inclination is that Sanders is teasing a new shoe release, hence the first puppy in the box.

Doing the math, it's clearly connected to the NFL, so there's got to be some kind of an NFL deal in place too. Maybe an exclusive shoe for the Lions? 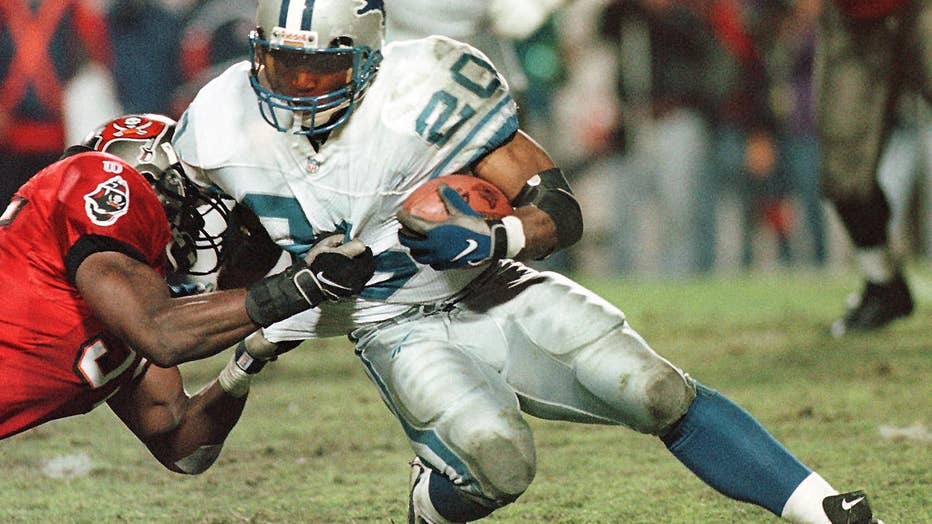 TAMPA, FL - DECEMBER 28: Detroit Lions running back Barry Sanders (R) is stopped by Derrick Brooks of the Tampa Bay Buccaneers 28 December during their NFC Wild Card playoff game at Houlihan Stadium in Tampa, FL. The Bucs won the game 20-10 and will