The teams met for the first time in five years. Michigan is 22-4 all-time against the Chippewas, but Central Michigan now has won three of seven meetings since 2002.

Jesse Zarzuela's 3-pointer with 16:14 left to play put Central Michigan in front, 36-35, and the Chippewas played with the lead for most of the remainder of the game. Dug McDaniel tied the game at 60-60 on two free throws with 3:14 left and Hunter Dickinson put the Wolverines in front with a free throw with 2:27 left, but Jett Howard missed a 3-pointer with 35 seconds left and Kobe Bufkin missed from long distance with 4 seconds left after Bass connected to give CMU the lead. 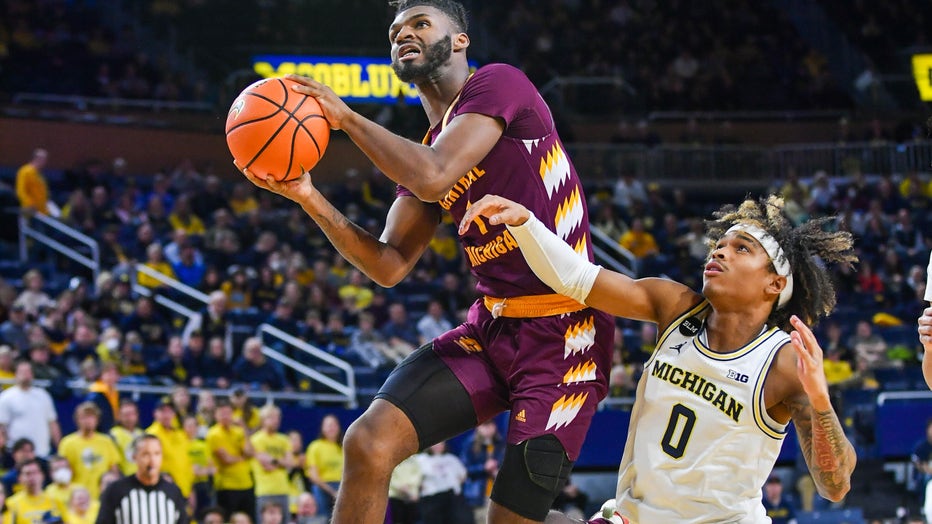 ANN ARBOR, MICHIGAN - DECEMBER 29: Reggie Bass #1 of the Central Michigan Chippewas attempts a shot after getting past Dug McDaniel #0 of the Michigan Wolverines during the first half of a college basketball game at Crisler Arena on December 29, 2022

Central Michigan has struggled with injuries throughout its non-conference schedule and played its eighth game without preseason All-Mid-American Conference point guard Kevin Miller. The victory was the team's first in seven games against a Division I opponent without its leading scorer.

Zarzuela led Central Michigan (5-8) with 19 points and six rebounds. Bass hit 4 of 11 from beyond the arc and contributed 16 points and seven rebounds. Brian Taylor added 12 points, four rebounds and three assists. The Chippewas held a 44-32 advantage on the boards and pulled down 17 caroms off the offensive glass.

Bufkin led Michigan (7-5) with 16 points. Dickinson knocked down 7 of 10 from the free-throw line and added 13 points. Howard hit 3 of 11 from distance and contributed 12 points, while McDaniel finished with 10 points and four assists.