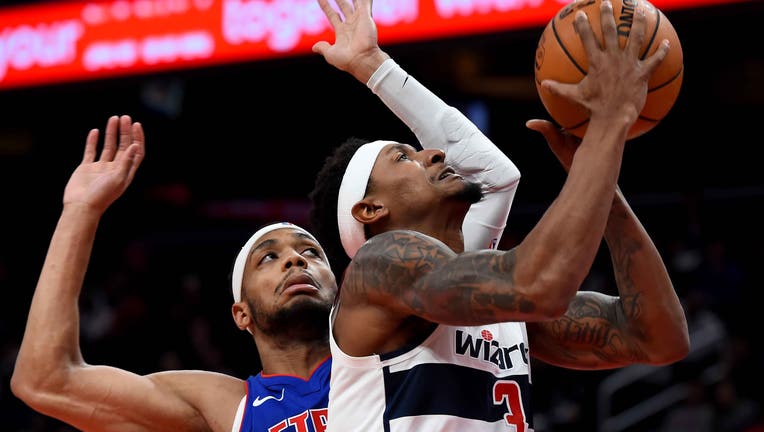 WASHINGTON, DC - NOVEMBER 04: Bradley Beal #3 of the Washington Wizards shoots against Bruce Brown #6 of the Detroit Pistons during the second half at Capital One Arena on November 4, 2019 in Washington, DC. NOTE TO USER: User expressly acknowledges

Two days after losing by 22 points at home to the Minnesota Timberwolves, the Wizards improved to 2-4 thanks to 14 points and seven rebounds from Thomas Bryant, and nine points and six assists from Isaiah Thomas in his first start of the season.

Rookie Rui Hachimura bounced back from his worst game as a pro with 10 first-quarter points for Washington and ended up with 12 points and four rebounds. In the previous game, Hachimura - the first Japanese player taken in the opening round of the NBA draft - shot just 2 for 11 and had season lows of four points and two rebounds.

Speaking about that loss to Minnesota, which was missing the suspended Karl-Anthony Towns, Brooks said: "It was the first game that we played really bad. We played bad on both ends. I was falling in love with our team and I wasn't loving 'em too much that night."

He had to be happier this time.

One key was that Drummond did not continue to fill the stat sheet the way he has been. Bidding to become the first player in at least 35 seasons to post four consecutive games with at least 20 points and 20 rebounds, he got there in one of the categories, finishing with 15 points and 24 rebounds. Drummond shot 6 of 20, going 1 of 8 in the fourth quarter as Washington pulled away.

The Pistons were without Blake Griffin (left hamstring and knee), Derrick Rose (right hamstring) and Reggie Jackson (lower back).

Hachimura's dunk off an alley-oop pass from Ish Smith halfway through second quarter provided the hosts with their biggest lead of the half at 54-37. But Detroit responded immediately with a 16-2 run, as Drummond finally got more involved at the offensive end, and by halftime, Washington was up by only 63-61.

The Wizards pulled away in the third quarter, and a layup by Troy Brown Jr. in the last minute of that period got their lead up to 93-75.

Pistons: F Markieff Morris played for the Wizards until they traded him away last season. He had four points and two rebounds.

Wizards: F C.J. Miles was available for the first time this season after having surgery for a stress fracture in his left foot this summer. He made his Wizards debut late in the first quarter and scored 12 points. ... Beal passed Kevin Loughery for fifth in franchise history in career scoring. Next up is Wes Unseld, who has 10,624, more than 700 ahead of Beal.

Wizards: At the Indiana Pacers on Wednesday.