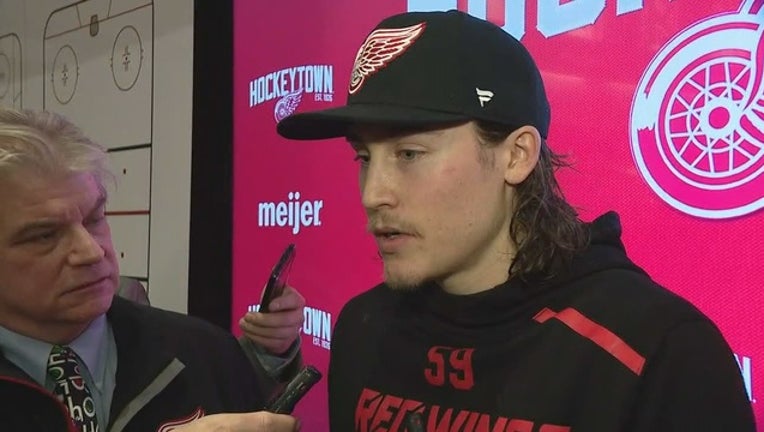 BUFFALO, N.Y. (AP) - The playoffs may be well beyond reach, but the Detroit Red Wings are showing some fight at the end of another disappointing season.

Tyler Bertuzzi and Dylan Larkin each had two goals to lead the Red Wings to a 5-4 overtime win over the Buffalo Sabres on Thursday night. It was Detroit's fifth win in its last six games.

"We talked about it after the trade deadline - things didn't go our way for a little bit there," Larkin said. "We continued to talk about doing it the right way, finding a maturity in our game. ... It's been more fun winning."

Bertuzzi scored the winner on a 3-on-2 rush in the extra session. The Red Wings showed patience before finding Bertuzzi alone in the right circle, who buried a one-timer into the net.

"What I like is, I thought we lost our way a little bit after the trade deadline," Detroit coach Jeff Blashill said. "I didn't see the same sacrifice and night-to-night urgency and compete that I think is needed to move this organization forward. Over the last five-to-six games, we've done that. ... Guys are growing in the positions they're in; they're not perfect, but they're getting better. And that's the biggest key for us, is that we're moving toward a better tomorrow."

Jack Eichel, Kyle Okposo, Marco Scandella and Casey Mittelstadt scored for the Sabres, whose losing streak continued after a late rally. The Sabres have lost 12 of their last 13 games. Linus Ullmark struggled between the pipes, making 29 saves.

"Go down two, have a great, strong second period, showed some good resiliency," Sabres coach Phil Housley said. "In the third period, just some young mistakes. It's unfortunate, but I like the way we came back. We fought until the end, gave ourselves an opportunity."

In the third period, the Red Wings took a two-goal lead for the second time - only to see the Sabres come back for a second time.

Larkin made it 3-2 on a highlight-reel effort 6:44 into the third. The Red Wings' leading scorer picked the puck up behind the right circle and spun all the way to the left circle, beating Ullmark with a wrist shot through traffic.

Larkin's second came with 6:56 remaining. With Ullmark out of position following a Sabres defensive breakdown, Larkin finished a one-timer for his 30th goal of the season. Larkin became the first Detroit player since 2008-09 to score 30 goals in a season.

The Sabres stormed back with a pair of goals in a span of 41 seconds.

Showing patience in front of the net, Mittelstadt scored his 12th goal of the season from close range with 4:59 remaining.

Eichel evened the score at 4 moments later, finishing a breakaway after a setup pass by Victor Olofsson, who was playing in his first NHL game.

"We sure would like to clean it up there in the third and not have them coming back, a sight we've seen too many times this year," Larkin said. "It's good to get the two points and find a way but, again, we've got to clean things up."

Bertuzzi opened the scoring on the power play with 7:58 remaining in the first period.

Hronek made it 2-0 just one minute into the second on an odd-man rush with Sabres winger Sam Reinhart coming back late.

The Sabres then responded with two goals of their own. Okposo cut Detroit's lead to one with a power-play goal 6:12 into the second, scoring on a wrist shot for his first goal in nine games. Scandella evened the score with 2:44 left in the period, collecting a pass from Zemgus Girgensons.

Detroit center Frans Nielsen left with an apparent head injury with 8:17 remaining. Nielsen collided with teammate Luke Witkowski and Buffalo's Kyle Okposo before going down to the ice.

Detroit defenseman Jonathan Ericsson also left the game in the first period with a lower-body injury.

Blashill had no update regarding either player after the game.

Sabres: On the road against the New York Islanders on Saturday.