Bojan Bogdanovic added 27 points for the shorthanded Pistons, who were down 10-0 in the first three minutes. Four other players had at least 13 points.

Anthony Edwards scored 20 for Minnesota, which had won four straight since a 116-104 loss to Detroit on New Year's Eve. D'Angelo Russell added 19 and Rudy Gobert had 16 points and 14 rebounds. 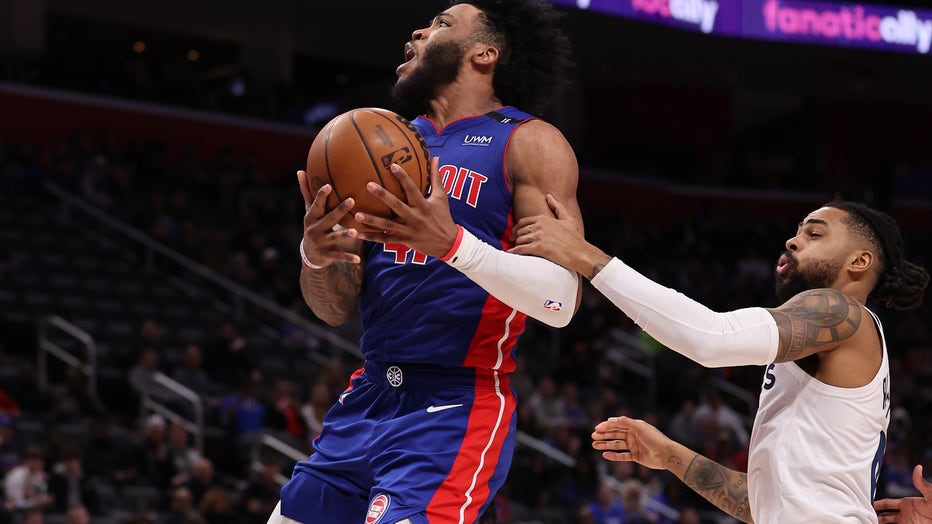 DETROIT, MICHIGAN - JANUARY 11: Saddiq Bey #41 of the Detroit Pistons is fouled by D'Angelo Russell #0 of the Minnesota Timberwolves on his way to the basket in the second half at Little Caesars Arena on January 11, 2023 in Detroit, Michigan. Detroit

The Pistons were without three rotation post players: Marvin Bagley III (hand), Jalen Duran (ankle) and Isaiah Stewart (shoulder). That left Nerlens Noel, who had played in only nine of Detroit's first 45 games, as the starting center against Gobert.

Edwards missed the third quarter with hip soreness and Russell picked up two fouls early in the period, sending him to the bench with four. Without them, Minnesota struggled at both ends of the floor, allowing the Pistons to take a 94-81 lead with three minutes left in the period.

The Pistons outscored Minnesota 36-23 in the third to take a 101-87 lead. Edwards returned for the fourth, scoring 15 points, but Detroit was never threatened.

Timberwolves: Taurean Prince had nine points in 27 minutes despite limping off the floor in the first half after stepping on Noel's foot and rolling his ankle.

Pistons: Detroit pulled away in the second half with a lineup that had 6-foot-7 Kevin Knox II at center against the 7-foot-1 Gobert.