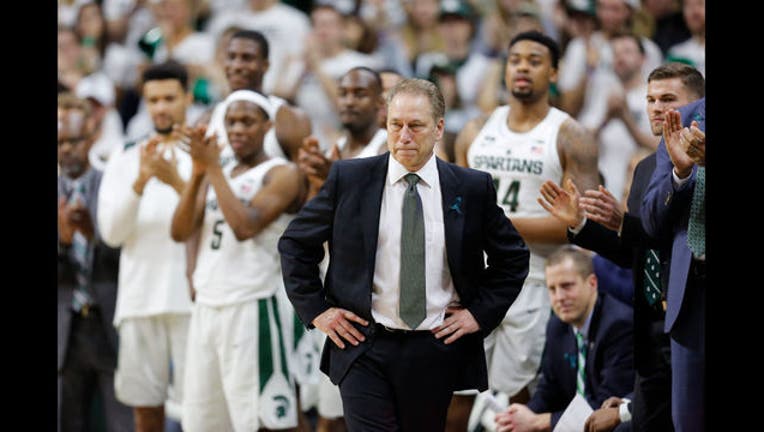 It's time to take this Midwest hoops show back on the road again.

The Big Ten Tournament begins Wednesday, one week earlier than usual at a rather unusual venue: Madison Square Garden in New York. While well outside of the league's predominantly-Midwest footprint, the Garden can't be beat as one of the traditional hubs of college basketball.

No better place for a potential NCAA bubble team like Nebraska to make a stand. The Cornhuskers had a school-record 13 conference wins to bust its reputation as a lower-division dweller.

"Personally I think so," guard Anton Gill said when asked after a 76-64 win Sunday over Penn State if Nebraska had done enough to make the NCAAs. "But we're not going down to New York just to play around. We want to win that, too. We feel like we have the best team in the Big Ten."

Coach Tom Izzo's team won the conference crown outright and the top seed in the Big Ten tourney by grinding out a 68-63 win at Wisconsin in a matchup of the last two team conference teams to make the Final Four (2015).

Each school has had had challenging seasons for different reasons.

The young Badgers endured growing pains and an uncharacteristic losing season. But there are signs that the inexperienced players surrounding Ethan Happ are finally getting it after winning four of five games before ending the regular season with a close loss to Michigan State.

In the locker room, guard Brad Davison had a message for his fellow Badgers after the freshman scored a career-high 30 points.

"I just told them, 'I'd rather beat the next week anyway,'" Davison said, referring to the Big Ten tourney. "It's not college football. It's college basketball, where the regular season is kind of washed away."

Michigan State's most pressing issues have come off the court.

Following a Yahoo Sports report last week, Michigan State said its compliance office discovered that Bridges' family had dinner with an agent last winter without his knowledge, committing an NCAA violation. The school said the finding Friday made Bridges ineligible, leading it to apply for reinstatement, which was granted the next day by the NCAA.

Questions are likely to come up again in New York. On the court, the Spartans have pressed on and head into the postseason with a 28-3 record, the best start in school history.

"Handling the adversity that they've handled I think is going to make them better men for the next 60 years," Izzo said.

Other story lines and things to watch at the Big Ten Tournament:

SPARTY'S STARS: Bridges draws the most attention from opposing defenses, while Nick Ward and Jaren Jackson Jr. provide heft up front. But in the backcourt, Cassius Winston offers balance with 3-point marksmanship. He's 16 of 20 from behind the arc over his last four games, including a 6-of-6 effort against Wisconsin.

BUCKEYES ARE BACK: Chris Holtmann's first season coaching at Ohio State was a hit after the Buckeyes exceeded preseason expectations to finish 15-3 in the league to get the second seed in the tournament. Forward Keita Bates-Diop (19.2 points, 8.9 rebounds) won league player of the year honors.

BOILERS BACK UP: A three-game losing streak in mid-February ended Purdue's chances to win the Big Ten. But the Boilermakers have steadied themselves with three straight wins headed into the conference tourney. They might have an ideal mix to do postseason damage with tested seniors and balanced scoring.

WHAT HAPPENED?: Northwestern took a step back one year after making the NCAA Tournament for the first time in school history. The injury-plagued Wildcats (15-16) likely need to win the conference tourney to return to the NCAAs.

WOLVERINE Ws: Looking for a contender outside of the top four? Fifth-seeded Michigan enters the tournament having won five straight games and seven of eight. The Wolverines face the winner of the Illinois-Iowa game on Thursday, then could face Nebraska on Friday. Michigan lost to Nebraska by 20 in Lincoln in January.