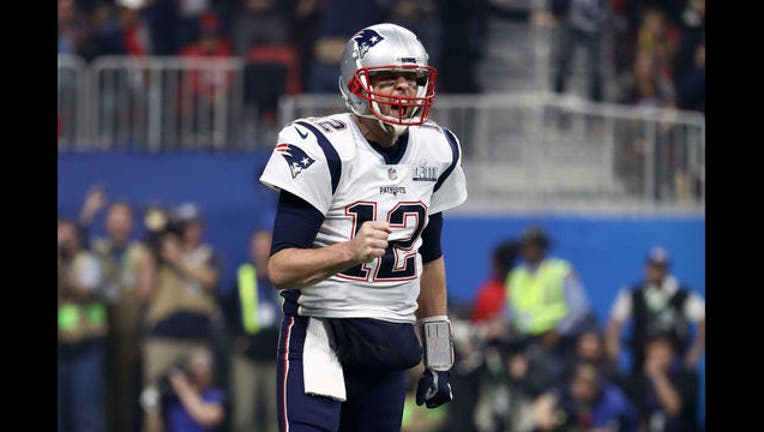 ATLANTA (AP) - If Tom Brady rated his performance, nothing more, it was ho-hum at best.

In fact, going strictly by the numbers, it was the worst Super Bowl showing of his brilliant career.

On a night when the defenses ruled, Brady did just enough to win his sixth Super Bowl ring , leading the New England Patriots to an aesthetically unpleasing 13-3 victory Sunday over the Los Angeles Rams.

In last year's Super Bowl, Brady threw for 505 yards and three touchdowns but walked off the field with his head down as the Philadelphia Eagles celebrated a 41-33 victory.

Brady completed 21 of 35 passes for 262 yards with one interception, leaving him with a rather measly passer rating of 71.4. That is the worst figure of his nine Super Bowl appearances, and marked the first time he failed to throw for at least one touchdown pass in the championship game.

"We obviously could have played better offensively," Brady said, "but the reality is (when) you get in these games, you just have to find a way to win. We played well in the end and that's what we needed."

Indeed, Brady finally found his vintage form on the lone touchdown drive of the night. He hit four straight passes for 67 yards - the best of them a pinpoint toss threaded amid three defenders that dropped into the hands of Rob Gronkowski for a 29-yard gain to the Los Angeles 2.

"Incredible catch," Brady said. "He's an awesome player, great teammate, friend, and I'm just so proud of everything that he's done for our team."

On the very next play, Sony Michel darted into the end zone to break a 3-all tie.

Not long after, Brady was taking a knee to become the first player in NFL history to win six Super Bowl titles.

The first one came against the Rams, way back in 2002, when that franchise was still St. Louis and known as the "The Greatest Show On Turf."

Now, at age 41, Brady has gotten started on a ring for every finger on his other hand.

"There's been a lot of guys be part of this journey with this team and it's just been so fun to be a part of it," Brady said. "It's a challenging football environment, the pressure is always on, and for moments like this, you have to rise to the occasion."

Sure, it was the lowest-scoring Super Bowl ever, a game that won't be remembered fondly by anyone outside of New England.

For Brady, it might be the favorite of all his titles.

This one took a team.

"We needed everyone out there," he said. "The defense played so well, and we finally helped them out by getting a touchdown."