Burks was a point shy of his career high and Immanuel Quickley added 18 points as the Knicks' reserves combined for 65 points. RJ Barrett was the only starter in double figures at 15 points, and New York outscored Detroit 30-14 in the fourth quarter.

Knicks coach Tom Thibodeau rode his second unit during the fourth-quarter comeback. New York had a 65-7 advantage in bench points, and three of those reserves recently cleared the league's COVID-19 health and safety protocols.

"We just felt we'll find some people that can get something done. That's what we did," Thibodeau said. "In some ways, that was a blessing. Those guys were out and now they're back in, so their energy was real high."

Burks scored 19 points in the fourth quarter on a night when the team's usual leading scorer, Julius Randle, was limited to five points on 2-for-11 shooting. 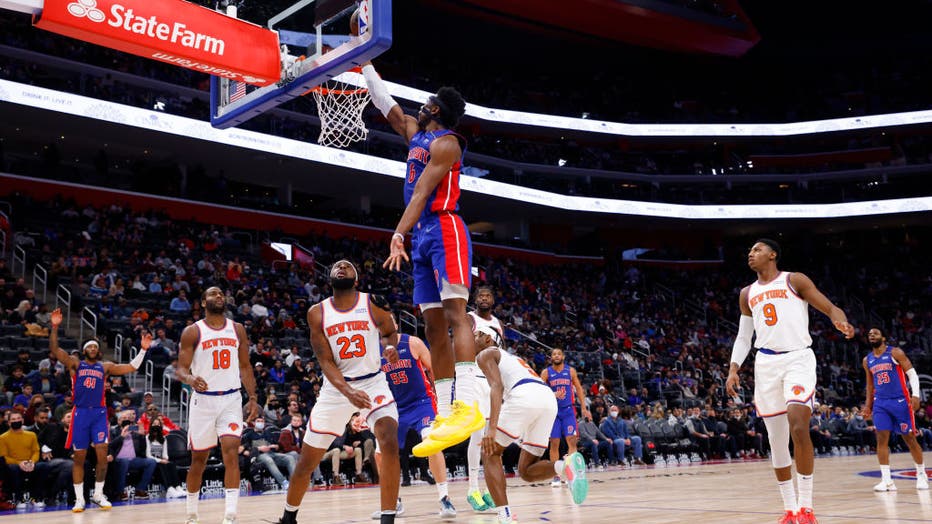 DETROIT, MICHIGAN - DECEMBER 29: Hamidou Diallo #6 of the Detroit Pistons shoots on 1 #23 of the New York Knicks in the second half at Little Caesars Arena on December 29, 2021 in Detroit, Michigan. NOTE TO USER: User expressly acknowledges and agree

"We just came in and tried to play hard, tried to turn the game around," Burks said. "(Looked to) make plays on the defensive end and share the ball on the offensive end."

"Just digging down and making play after play," Thibodeau said. "That's what I love about those veterans. Alec and Taj are true pros."

Saddiq Bey had a career-high 32 points for the Pistons, while Hamidou Diallo had a season-high 31 points with 13 rebounds.

"I've got to do more for us to get the win," said Bey, the only usual starter in uniform for the Pistons. "I take that responsibility."

The Pistons have lost four in a row and 18 of 19. A COVID-19 outbreak has left them with just four players from their usual 15-man roster, with seven replacements in on 10-day contracts and another on a two-way deal.

One of the four players on the main roster, Frank Jackson, injured his ankle in the first half and didn't return.

New York led 48-41 at halftime. Detroit scored the first 11 points of the second half and also had a 14-2 run in the third quarter.

"It was a great effort from the new guys. They came in and competed as hard as they could for 48 minutes and played well," Bey said. "Obviously, we have to get used to playing with each other. It was good to see the fight and effort and with some cohesion, we could be better down the stretch."

Burks scored 10 points during the Knicks' 14-0 run to start the fourth quarter. That gave New York a seven-point lead, and it led the remainder of the game.

The Knicks have won seven straight against the Pistons. ... New York's three-game winning streak matches its longest this season. The Knicks also won three straight Oct. 26-30. ... Knicks guard Evan Fournier was a late scratch due to a sore right ankle. ... Justin Robinson made his Pistons debut after playing a combined 20 games for Milwaukee and Sacramento this season. He had three points in 11 minutes. ... Detroit's Trayvon Palmer made his NBA debut in the first half. Palmer, 27, signed a 10-day contract on Tuesday. He went scoreless in 17 minutes.