Rays rookie shortstop Wander Franco extended his on-base streak to 39 games, then left in the first inning with tightness in his right hamstring.

"We'll know more, but hopefully we caught it early enough," Rays manager Kevin Cash said. "I'm sure he'll miss some time, but we're hoping it isn't as bad as it could be."

The 20-year-old Franco, who came up limping on Nelson Cruz's double in the first inning, has the second longest on-base run in major league history for a player before his 21st birthday — Frank Robinson set the record of 43 in 1956. 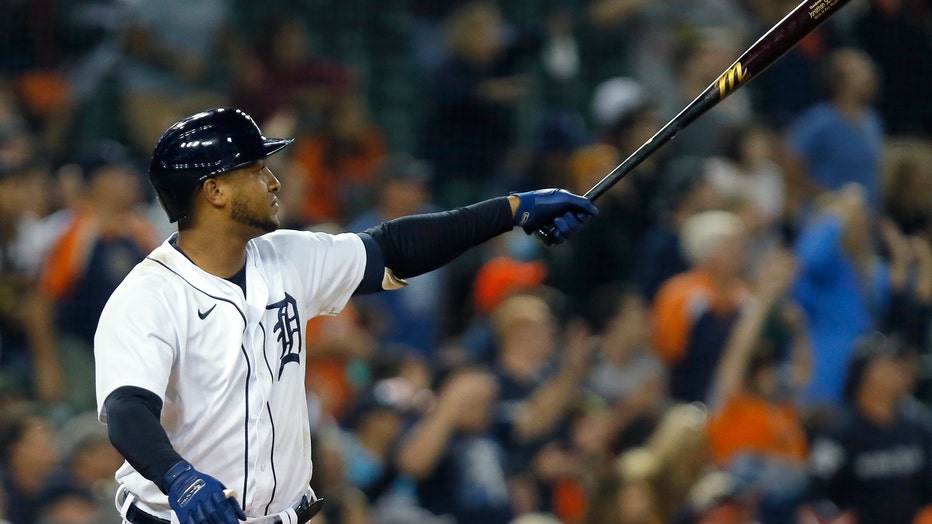 DETROIT, MI - SEPTEMBER 10: Jonathan Schoop #7 of the Detroit Tigers watches his grand slam against the Tampa Bay Rays during the seventh inning, to take a 7-4 lead, at Comerica Park on September 10, 2021, in Detroit, Michigan. (Photo by Duane Burles

"I felt it when I pushed off second for third base. That's a play where I normally score," he said through a translator. "I had trouble with my hamstring in spring training (in 2019) and it was OK, so I hope I don't go on the (injured list)."

The Tigers scored twice in the sixth, four times in the seventh and three more in the eighth to beat the team with the best record in the AL.

Cabrera singled in his first two at-bats, giving him a career total of 2,973 and making him the first Tigers player to get nine straight hits since Walt Dropo’s major league record 12 straight in July 1952.

"It seems like that would be impossible, especially as good as pitching and defense are these days," Tigers manager A.J. Hinch said. "Miggy's not legging out any infield singles, either. He's just swinging the bat extremely well."

Cabrera was the first big leaguer aged 38 or older to get nine straight hits since Tigers Hall of Famer Ty Cobb did it in 1925, the Elias Sports Bureau said.

"It's amazing to be out there and watch him every day," said Akil Baddoo, who has talked about growing up using Cabrera in video games. "He's going to the Hall of Fame on the first ballot and he's still doing these things."

The Rays trailed 3-1 going into the seventh, but loaded the bases with two out on a single and two walks by Jose Cisnero (4-4). Pinch-hitter Ji-Man Choi put the Rays ahead with a three-run double just past the dive of center fielder Derek Hill.

In the half, Detroit put runners on second and third with no outs against Pete Fairbanks (3-6), but pinch-hitter Harold Castro was called out on a 3-2 pitch.

Baddoo walked to load the bases, and Andrew Kitteredge replaced Fairbanks. On his second pitch, he appeared to hit Schoop on the knee, but a replay review was inconclusive.

"I was trying to throw a slider down and away and it wasn't down or away," Kitteredge said. "It was a bad hanging breaking ball and he took advantage."

Victor Reyes made it 10-4 with a three-run homer in the eighth.

"That was very uncharacteristic of our bullpen," Cash said. "The Tigers just were really swinging the bats well all night."

"Tyler did a really nice job on short notice and short rest," Hinch said. "I'm not sure if we will see Wacha again next weekend, so I'm going to be vague about him, but we definitely need to make some adjustments."

The Rays loaded the bases with one out in the first inning, but Alexander struck out Brandon Lowe and Tyler Luplow to escape the jam.

Tampa Bay took the lead in the fifth. Kevin Kiermaier led off with a triple and scored on a single by Joey Wendle, who had replaced Franco.

Eric Haase tied the game in the bottom half with his 21st home run, the eighth allowed by Wacha in his last six starts.

The Tigers took a 3-1 lead in the sixth. Baddoo led off the sixth with a triple against J.P. Feyereisen. Schoop struck out, but Robbie Grossman walked to put runners on the corners.

Cabrera struck out, ending his hit streak at nine, but Jeimer Candelario hit a two-run double over Kiermaier’s head in center field.

CRUZ'S HOME AWAY FROM HOME

"He just haunts us," Hinch said. "I thought we were done with him for the season, and then he gets traded to a team we're playing two more times."

SCHOOP FIRED UP BY OLD HIGHLIGHTS

As Schoop was preparing to bat in the seventh, the Comerica Park scoreboard showed footage of him celebrating with his teammates after winning the 2004 Little League World Series with Curacao.

"I saw that and I started thinking about how much it was to win that," he said. "It took some of the pressure off the at-bat."