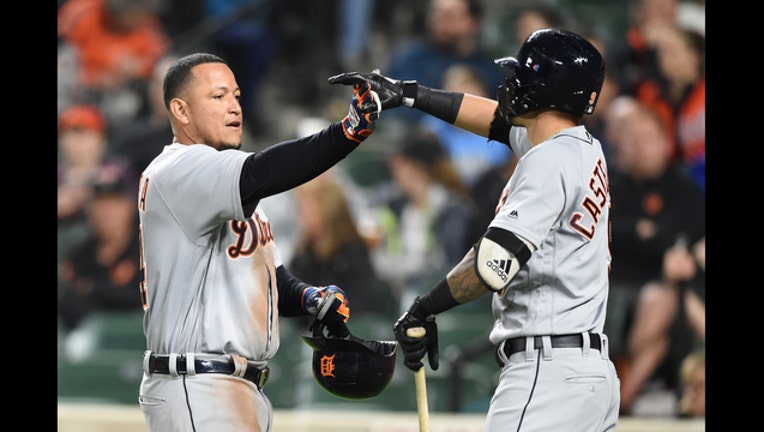 BALTIMORE, MD - APRIL 28: Miguel Cabrera #24 of the Detroit Tigers celebrates a three run home run in the second inning with Nicholas Castellanos #9 during a baseball game against the Baltimore Orioles. (Photo by Mitchell Layton/Getty Images)

BALTIMORE (AP) - Miguel Cabrera spent much of the night pounding balls around Camden Yards, and helped the Detroit Tigers awaken from their recent offensive slumber.

Cabrera homered and drove in five runs and the Tigers snapped a three-game skid with a 9-5 victory over the Baltimore Orioles on Saturday night.

Cabrera finished with three hits and now has 11 homers in 34 games in Baltimore.

"Cabby came up and got some big hits for us and had a heck of a night, and we needed that," Tigers manager Ron Gardenhire said. "Cabby's our guy. He's our guy in the middle, and he's the guy that's going to stir the drink. We need him to be big and he was tonight."

Francisco Liriano (3-1) allowed three runs and six hits with one strikeout and two walks over 6 1/3 innings. He has beaten Baltimore twice this year.

"It's good for me," Liriano said. "You have to make good pitches and hit your spot. I tried to go out and just try to get some quick outs and keep it moving and got some good rhythm."

Victor Martinez hit a solo homer off Darren O'Day in the ninth that gave the Tigers some breathing room.

Manny Machado had two hits and two RBIs for the Orioles, who have lost 12 of their last 14 games. Baltimore can still salvage its first series win at home Sunday.

Detroit snapped a streak of 22 scoreless innings when Nicholas Castellanos hit an RBI single in the first.

The Tigers extended their lead to 5-0 in the second off Andrew Cashner (1-4) on an RBI single by Leonys Martin and a three-run shot by Cabrera.

Cabrera increased the margin to 7-0 with a two-run double in the fourth.

Cashner allowed seven runs and seven hits with four strikeouts and three walks over four innings, his shortest outing of the season.

"Some nights are better than others, but the breaks just went the other way," Cashner said.

Baltimore finally got on the board in the fifth on a fielder's choice by Craig Gentry. The Tigers extended the lead to 8-1 on an RBI single by James McCann off Pedro Araujo in the seventh.

The Orioles closed the gap when Warwick Saupold hit Chance Sisco and walked Jace Peterson with the bases loaded. Joe Jimenez entered and allowed a two-run single to Machado that cut the margin to 8-5.

"Proud and commend our guys for getting the tying run to the plate and fighting our way all the way back," Orioles manager Buck Showater said. "But it creates not much margin for error and the tack-on runs at the end of the game kind of create, you almost have to be perfect out of the bullpen the rest of the way. It's tough."

The game was delayed 30 minutes because of rain.

Cabrera now has 2,665 hits over his career, tying Max Carey for 73rd on the MLB all-time list. He also has 464 career home runs, which ties Dave Winfield for 34th all-time.

Gentry sprinted into foul territory in left field and made a nice sliding grab off the bat of Martinez that ended the fourth inning with a runner on second.

Orioles: OF Joey Rickard was recalled from Triple-A Norfolk and started in right field. The move provided Baltimore with a four-man bench. LHP Tanner Scott was optioned to the Tides.

Orioles: 3B Tim Beckham (groin) is traveling to the team's spring training facility in Sarasota, Fla. to begin rehab Sunday. Beckham, who underwent surgery Thursday, is not expected to begin playing games for at least six weeks.

Tigers: LHP Daniel Norris (0-1, 4.91 ERA) threw out of the bullpen Wednesday in a doubleheader against the Pirates, allowing a run and two hits with pair of strikes and a walk over two innings.

Orioles: Kevin Gausman (1-2, 4.66 ERA) allowed four runs and two hits over eight innings in his last start against Cleveland, his longest outing since last September. He has posted a 3.24 ERA in his past four starts after allowing six runs in the season opener.