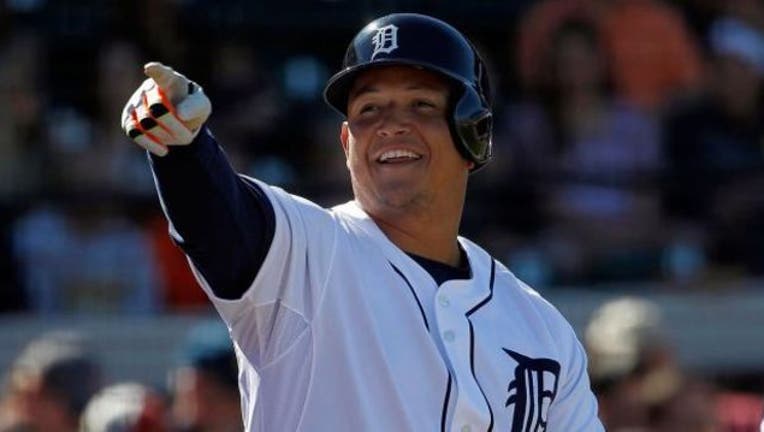 CHICAGO (AP) - The Detroit Tigers figured they were due to break out at the plate, and that's exactly what they did Friday night.

Miguel Cabrera delivered a go-ahead two-run single in the seventh and matched a season high with four hits to lead the Tigers to a 7-5 victory over the struggling Chicago White Sox.

Cabrera became the 56th major leaguer to reach 1,500 RBIs with his single off Nate Jones in the seventh. That put Detroit back on top after the Tigers blew a three-run lead in the fifth and sent Chicago to its eighth loss in nine games.

Ian Kinsler scored three runs, Nick Castellanos had two of Detroit's 11 hits and the Tigers broke through after managing just six runs over the previous four games against Minnesota and Chicago.

"Our balls were finding holes today," Castellanos said. "Against the Twins, we hit the ball just as hard as we did tonight. It just was right at people."

Kyle Ryan (4-2) pitched a scoreless inning in relief after a rare shaky start by Michael Fulmer. Francisco Rodriguez worked the ninth for his 27th save in 29 chances as Detroit won its second in a row.

Chicago's Justin Morneau hit his first home run in more than 14 months. Jose Abreu had three hits and drove in two runs. But Jacob Turner got knocked out in the fourth inning, Carson Fulmer (0-1) struggled in relief and the White Sox fell to 23-40 since a 23-10 start.

Carson Fulmer came on with a 5-4 lead in the seventh and quickly ran into trouble.

The Tigers loaded the bases with none out before Jose Iglesias drove in Justin Upton with a fielder's choice grounder. After Cameron Maybin walked with one out to load the bases again, Cabrera greeted Jones with a two-run single up the middle.

That gave the slugger 1,501 RBIs and put Detroit back on top. It also gave him 43 four-hit games, tied for 32nd all-time with Willie Davis.

But Cabrera wasn't all that interested in talking about his RBI milestone or his performance at the plate.

"We gotta get another game tomorrow," the 11-time All-Star said.

Carson Fulmer threw 30 pitches — 12 for strikes — in his third major league appearance. It was also the first pressure situation for the promising rookie.

"Quick memory and throw it over your shoulder and prepare for tomorrow," he said. "I can't ever use the excuse of it being my first big-time experience and especially for me being put in that situation. Hopefully I get the opportunity to do it again."

The White Sox looked like they might pull this one out when they scored four in the fifth to go up 5-4.

Morneau capped that rally with his three-run drive off Michael Fulmer.

The home run was the first for the four-time All-Star and former AL MVP since he hit one for Colorado against Arizona on May 6, 2015. It came in his seventh game and 17th at-bat for the White Sox, who signed Morneau on June 9 and placed him on the disabled list so he could continue to recover from offseason elbow surgery.

Michael Fulmer gave up five runs — four earned — and six hits in five innings after posting a 0.83 ERA in his previous 10 starts.

Turner threw 101 pitches in 3 1/3 innings, allowing four runs and five hits. He walked four and struck out six after getting roughed up in his previous start against the Los Angeles Angels.

White Sox: 2B Brett Lawrie was feeling worse and unavailable after leaving Thursday's game because of tightness in his left hamstring, manager Robin Ventura said. He had an MRI on Friday, but the White Sox do not expect him to land on the disabled list.