DETROIT - Jeimer Candelario homered, drove in three runs and started two double plays as the Detroit Tigers finished a weekend sweep of the Minnesota Twins with a 7-0 win on Sunday.

The game was the seventh in a row between the teams. Minnesota swept a four-game series at home immediately before the All-Star break before losing three in Detroit. The series was originally scheduled for four games, but Friday's doubleheader was rained out. The Tigers swept a doubleheader on Saturday.

Jennifer Hammond reports from Comerica Park after the Tigers 7-0 victory on Sunday.

"This is a weird game at times," Tigers manager A.J. Hinch said. "They beat us up at their place, and then we come home and get a sweep. You don't usually see any team twice in a row like this, plus we're going right back there in a little over a week." 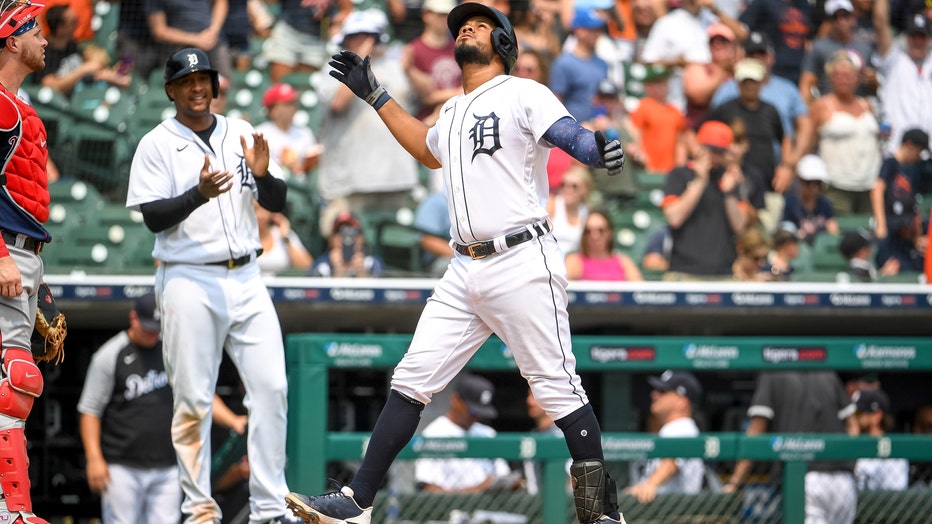 DETROIT, MICHIGAN - JULY 18: Jeimer Candelario #46 of the Detroit Tigers celebrates after hitting a homer against the Minnesota Twins during the bottom of the seventh inning at Comerica Park on July 18, 2021 in Detroit, Michigan. (Photo by Nic Antaya

Wily Peralta (3-1) pitched seven shutout innings for the second time in three starts, allowing four hits and four walks while striking out four. Peralta, who was aided by four double plays, is 3-1 with a 0.34 ERA in his last five starts.

"I'm a groundball pitcher, so having that kind of defense behind me is a great feeling," said Peralta, who is in a major league rotation for the first time since 2017. "I didn't really have a good feel for the ball in the first couple innings, and they made some big plays."

J.A. Happ (5-5) took the loss, giving up seven runs on 11 hits and a walk in seven innings. He struck out four and allowed two home runs.

With a doubleheader on Monday, Happ had to pitch deep into the game despite not having his best stuff.

"Unfortunately, this is the position we're in right now," he said. "It doesn't happen as often these days, but we needed innings. I just couldn't get out of a couple bad innings."

Jake Rogers led off the third with a double and moved up on Derek Hill's bunt single. Akil Baddoo struck out, but Jonathan Schoop gave the Tigers the lead with a sacrifice fly. After Robbie Grossman walked, Miguel Cabrera made it 2-0 with an RBI single and Candelario's double gave Detroit a three-run lead.

Baddoo and Hill both stole bases in the game as Hinch continues to manage an up-tempo style.

"It's fun out there right now," said Hill, who has stolen six bases in 11 games with the Tigers. "We've got a lot of guys who can be aggressive on the bases and we are all executing right now."

"(Happ) pitches very efficiently, so we thought we could get seven innings out of him even with the score a little worse than we would like," Twins manager Rocco Baldelli said. "He got the second out in the seventh, but Candelario hits one out and makes it a frustrating finish for him.

"We just didn't play well in this series. We've got an inexperienced group right now and we need to learn from this."

Twins: C Mitch Garver (groin) will join the team on Monday in Chicago and is expected to be activated during a four-game series against the White Sox.

Cabrera's RBI single in the third was his 2,929th hit, tying him with Al Simmons for 40th in major league history. Cabrera got a bigger cheer from the crowd in the ninth inning when he lifted teammate Harold Castro into the air as the Tigers' scoreboard displayed "Simba Cam."

Tigers: Detroit hosts the Texas Rangers for a four-game series starting on Monday. Casey Mize (5-5, 3.59) is scheduled to start for the Tigers in the opener against Kyle Gibson (6-1, 2.29).