MINNEAPOLIS - MINNEAPOLIS (AP) — Jeimer Candelario hit the tiebreaking two-run homer in the 10th inning after Harold Castro went deep twice earlier, and the Detroit Tigers dodged another sweep in Minnesota by coming back to beat the Twins 4-2 on Wednesday.

Candelario knocked a first-pitch fastball from Trevor Megill (0-1) into the grass berm behind center field, just beyond the reach of Gilberto Celestino’s glove to drive in the automatic runner and give the Tigers their first lead of the series.

The Twins, who had their six-game winning streak stopped, loaded the bases with no outs in the bottom half. Michael Fulmer struck out Carlos Correa before yielding to Andrew Chafin, who struck out Max Kepler and retired Gary Sánchez on a foul pop for his first save this season. 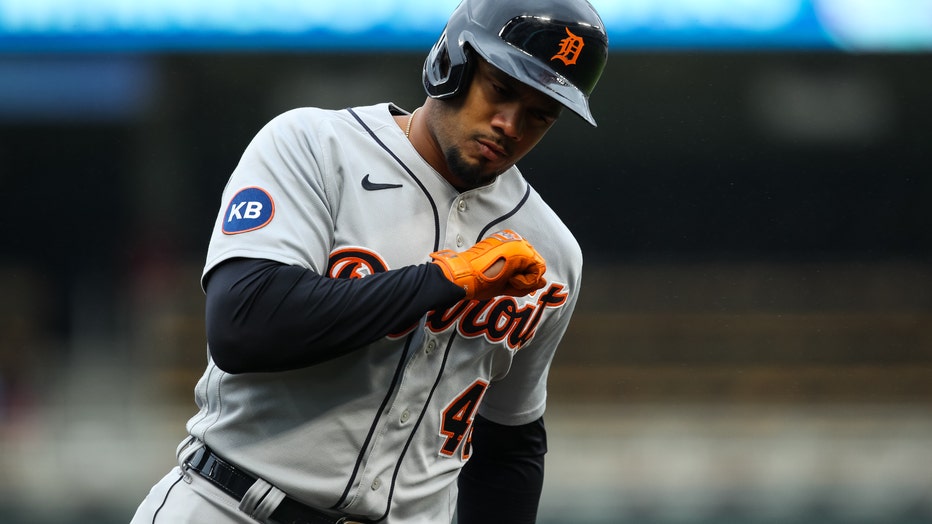 MINNEAPOLIS, MN - MAY 25: Jeimer Candelario #46 of the Detroit Tigers celebrates his two-run home run as he rounds the bases against the Minnesota Twins in the tenth inning of the game at Target Field on May 25, 2022 in Minneapolis, Minnesota. The Ti

Castro hit solo home runs in the sixth and eighth innings, after going deep only nine times in his first 799 major league at-bats. His first homer off Twins starter Dylan Bundy stopped a 16-inning scoreless streak for the Tigers, who have only 25 homers in 43 games for the fewest in baseball.

After a 54-minute delay to let the rain pass through, Bundy threw his first of 85 pitches and lasted until there were two outs in the sixth. Bundy had six strikeouts and allowed five hits and one walk, a step forward in his second appearance since being sidelined by COVID-19.

Trevor Larnach hit a two-run homer for the Twins in the fourth inning to spoil an otherwise-stellar fill-in start by Rony García that was pieced together by his fellow relievers. García finished the fourth, with three hits and two walks allowed. He had five strikeouts.

The myriad injuries in the rotation made this bullpen game necessary for the Tigers, but it also served as another showcase of their greatest strength. With the starting pitching depleted and the hitting badly lagging, the relievers entered the game with a collective 2.98 ERA for the second-best mark in baseball. Wily Peralta, Joe Jiménez, Gregory Soto and Alex Lange (1-1) kept the Twins off the board after García departed.

Entering the afternoon with a 7-15 record this month, the Tigers had only 50 runs in May, by far a major league low. Their OPS of .573 is also the worst in baseball this month.

Derek Hill tried to hustle the Tigers to their first run, when he legged out an infield single to deep shortstop, stole second base and advanced to third on a groundout.

When Bundy’s curveball bounced in the dirt and skipped to the right of the catcher Sánchez, Hill aggressively raced home. Sánchez whirled around and attempted to apply the tag as Hill contorted his body to try to dodge the glove and touch the plate while inadvertently tripping home plate umpire Charlie Ramos in the process. The close call was out, upheld by the replay review, but an exasperated manager A.J. Hinch came out to argue after his unsuccessful challenge.

Tigers: RF Robbie Grossman, who’s in a 4-for-55 slump with 20 strikeouts and only seven walks over his last 15 games, was on the bench. "He deserves a mental break," Hinch said. Grossman entered in the ninth for defense.

Twins: 2B Jorge Polanco rested for the second straight game because of soreness in his right ankle, which he cleanup surgery on after the 2019 and 2020 seasons. The cautionary handling of Polanco’s condition could include an additional day off, manager Rocco Baldelli conceded. "Nothing more than mild concern," Baldelli said.

Tigers: LHP Tarik Skubal (3-2, 2.22 ERA) takes the mound on Thursday night to begin a four-game series at home against Cleveland, after getting an extra day between starts to rest a bruised shin. RHP Aaron Civale (2-3, 7.84 ERA) pitches for the Guardians.

Twins: LHP Devin Smeltzer (1-0, 1.74 ERA) starts a four-game series on Thursday night against Kansas City, after being called up from Triple-A to sub for Joe Ryan, who went on the COVID-19 list. LHP Daniel Lynch (2-3, 4.01 ERA) takes the mound for the Royals.