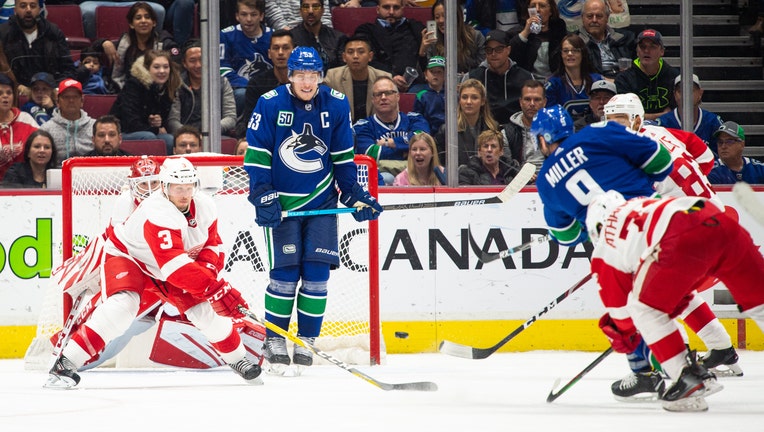 Miller had two of Vancouver's three power-play goals in the Canucks' 5-1 win over the Detroit Red Wings on Tuesday.

"It doesn't always work how you plan it, but we just kept doing a lot of the same things. We shot a couple more pucks and I think it was just a matter of time," Miller said.

Elias Pettersson and Alex Edler each had a goal and a pair of assists for the Canucks. Troy Stecher also scored and Brock Boeser finished with three assists.

Thatcher Demko had 26 saves for Vancouver to collect his first win of the season in his first start.

The 23-year-old had to rally back after allowing Larkin's goal on the first shot of the game.

"I think every goalie's been through that. So just kind of drawing on past experiences. I felt good today and didn't want that one to ruin my night," he said.

Vancouver got off to a rough start, with a costly turnover deep in its own zone.

Detroit right-winger Anthony Mantha collected the puck and found Larkin alone in the slot. Larkin slid a shot past Demko's blocker to put the Red Wings up 1-0 just 30 seconds into the game.

The Canucks countered later in the first as Jake Virtanen sent a spinning backward pass to Stecher at the point. Stecher sent a shot past Bernier to tie the game.

The Canucks moved out in front in the second, starting with a power-play goal 1:13 into the period.

Detroit's Mike Green was called for holding on Bo Horvat, and Edler scored on a long wrist shot 20 seconds into the man advantage.

Edler and the defensive core have been key to Vancouver's offensive success this year, scoring six of the team's 17 goals.

Tyler Myers set up the Canucks' next goal, firing a shot at Bernier, who made the stop but failed to control the rebound.

In front of the crease, Pettersson batted the puck out of the air and into the Wings' net.

Another penalty to Green gave Vancouver the advantage again midway through the second period.

Miller parked himself in front of Detroit's crease and tipped a shot from Edler, making it 4-1.

The Canucks had to go on the defensive early in the third, after both Miller and Jay Beagle were sent to the box for tripping in a 23-second span.

Their teammates killed off the ensuing five-on-three, but emotions erupted with nine seconds left in the second penalty when Mantha and Brandon Sutter squared off near center ice.

Mantha head butted Sutter, spurring several others to pair off.

Once officials had calmed the melee, Mantha headed to the box for tripping and unsportsmanlike conduct, while Sutter was called for roughing.

"We've talked about it before, we're not going to win games if the special teams aren't good enough," he said. "Obviously if you give up three power-play goals, you get a 5-on-3 and don't score, special teams have to be better than they were."

The result was a tough one to take, Larkin said.

"If we play like that every night it is going to be the same result," he said. "We're not good enough to come out and just throw our sticks out there and play hockey. We need to battle. We need to block shots, the PK needs to be good, we need to win battles in front of our net, and we didn't do any of that tonight and it's frustrating."

The Canucks got their fifth power-play opportunity of the game midway through the third period after Jacob de la Rose was called for holding.

Pettersson was taken down along the boards early in the advantage, but got up and rejoined the rush, setting up the final goal.

Pettersson patiently passed the puck around until he found Miller in the slot. Miller wasted no time in firing a wrist shot past Bernier.

The action wasn't over, however. Before the final buzzer, Stecher and Detroit's Adam Erne got into a scuffle deep in the Canucks end, resulting in both being given game misconducts.

NOTES: Alex Biega made his debut with the Red Wings. The former Canucks defenseman was sent down to Vancouver's American Hockey League team in Utica, New York, after training camp, then traded to Detroit earlier this month. ... Red Wings defenseman Danny DeKeyser was scratched from the lineup with an upper-body injury.