Noah Cates also scored for the Flyers, who are 9-3 in their last 12 games, and goalie Carter Hart stopped 30 shots.

Detroit forward Lucas Raymond scored his 15th of the season with 41.6 seconds left in regulation to spoil Hart's shutout bid. 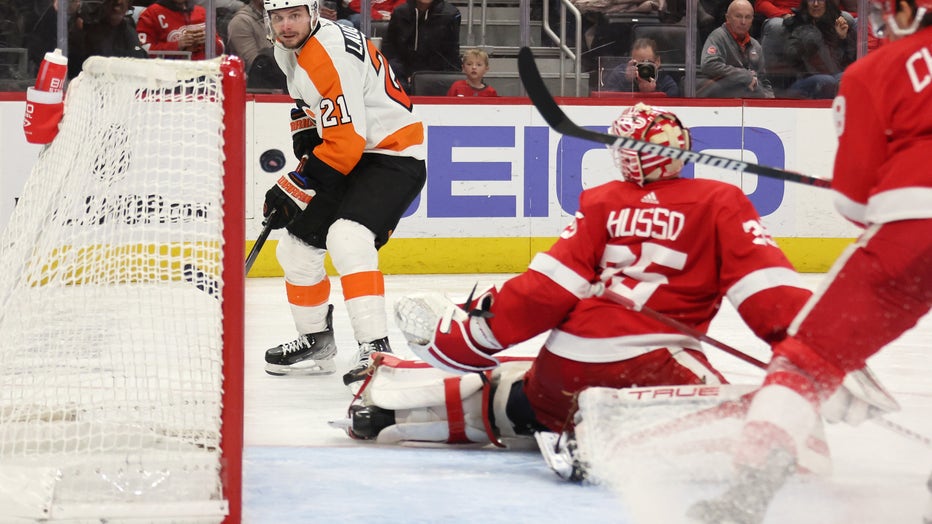 Laughton scored first at 9:01 of the third period with his 12th goal of the season. Flyers center Kevin Hayes passed the puck to Laughton as he was splitting the Detroit defense. Breaking into the clear, Laughton lifted a backhand shot over the glove of Red Wings goalie Ville Husso.

Cates added the second Flyers goal at 13:23 of the final period, converting Travis Konecny’s pass for his sixth of the season.

The Red Wings won all three meetings with the Flyers last season.

They’d also won two in a row from Philadelphia on home ice. In the all-time history of the two franchises, the Red Wings have never won four consecutive regular-season games over the Flyers.

Philadelphia’s last win over the Red Wings was a 3-0 shutout victory on Feb. 3, 2020, at Detroit. Laughton also scored the game winner in that victory.

The relentless Flyers blocked 29 Detroit shots. Perhaps Philadelphia’s best save of the night came when left-winger Nicolas Deslauriers threw himself across the goal crease to block a point-blank shot from Detroit forward David Perron.

Flyers defenseman Ivan Provorov blocked eight. After taking a shot from Detroit forward Michael Rasmussen in the ankle in the second period during a Red Wings power play, Provorov was unable to get to his feet. Defense partner Rasmus Ristolainen pushed Provorov to the Philadelphia bench while the Flyers ragged the puck.

Detroit went 0-for-2 on the power play. Philadelphia was 0-for-1 with the man advantage.

The Red Wings were without left-winger Tyler Bertuzzi. He’s listed as day-to-day with a lower-body injury.