Chapman hit a two-run homer off left-hander Tyler Alexander in the fourth and a solo shot off Angel De Jesus in the sixth, the ninth multi-homer game of his career and first this season. The home runs were his 17th and 18th of the year.

Jonathan Schoop and Willi Castro each hit a solo home run for the Tigers, who have lost five of eight since the All-Star break. 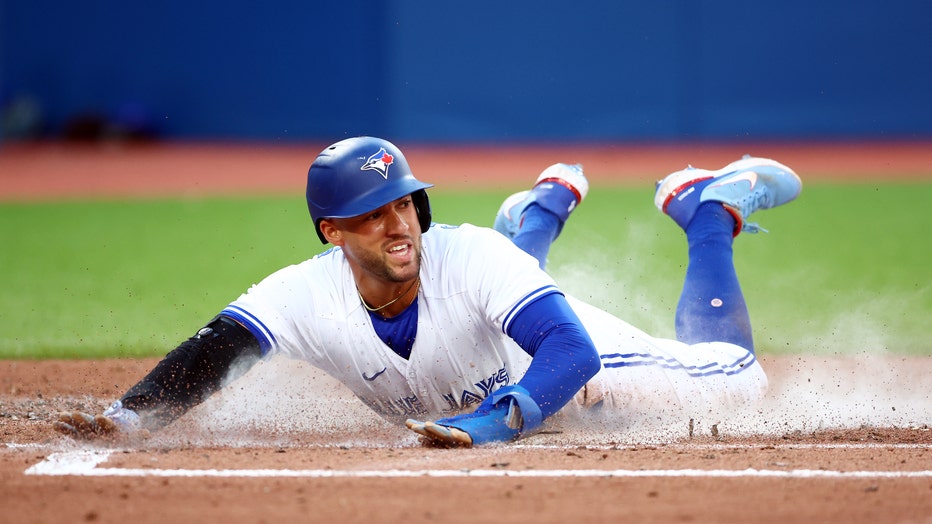 TORONTO, ON - JULY 28: George Springer #4 of the Toronto Blue Jays scores a run on a RBI single by Alejandro Kirk #30 in the third inning against the Detroit Tigers at Rogers Centre on July 28, 2022 in Toronto, Ontario, Canada. (Photo by Vaughn Ridle

Blue Jays outfielder George Springer made a diving catch to retire Jeimer Candelario in the fourth, racing in and leaving his feet to snare a sinking liner.

Kikuchi (4-5) last pitched July 5 at Oakland, when he walked five batters in 2 1/3 innings. The left-hander went on the injured list the next day because of a strained neck.

Robbie Grossman hit a leadoff double in the first and Castro launched a two-out homer in the second but those were the only hits off Kikuchi, who walked one and struck out five to win for the first time since beating Tampa Bay on June 30.

Detroit used a double, an error and a walk to load the bases against Yimi Garcia with nobody out in the eighth, but Garcia got Miguel Cabrera to fly out before Eric Haase hit a sacrifice fly. Toronto closer Jordan Romano came on and retired Candelario on a first-pitch groundout.

After Danny Jansen gave Toronto some insurance with a sacrifice fly off Alex Lange in the bottom of the eighth, Romano wrapped it up with a 1-2-3 ninth for his 22nd save in 25 chances.

Castro’s third homer opened the scoring in the second, but Alejandro Kirk tied it with a two-out RBI single in the third.

Chapman’s two homers put Toronto up 4-1. Schoop cut it to 4-2 when he connected off Tim Mayza in the seventh for his seventh home run.

Earlier on Thursday the Blue Jays announced plans for a $230 million renovation of Rogers Centre, their downtown home since 1989. The change will not involve replacing the artificial turf surface with grass, but will include new bar, restaurant and patio areas in the outfield, elevated bullpens, a reduction in foul territory, and expanded clubhouse and training facilities for players.

New Toronto FC star Federico Bernadeschi attended the game wearing a Blue Jays jersey with his name and No. 10 on the back. Bernadeschi left Italy’s Juventus to sign with Toronto on July 15.