The Buckeyes (6-0, 3-0 Big Ten) scored on their opening drive for the fifth straight game when Marvin Harrison Jr. caught his first of three touchdowns. TreVeyon Henderson ran for 118 yards and a touchdown before limping off the field with an apparent right leg injury in the third quarter.

The Spartans (2-4, 0-3) have lost four straight after winning their first two games this season.

Stroud was 21 of 26 for 361 yards. He became the first player in program history to throw six touchdowns in three games, a feat he pulled off in consecutive contests against Michigan State. Stroud threw an interception for the third straight game and the latest was returned 32 yards to pull the Spartans into a 7-all tie. 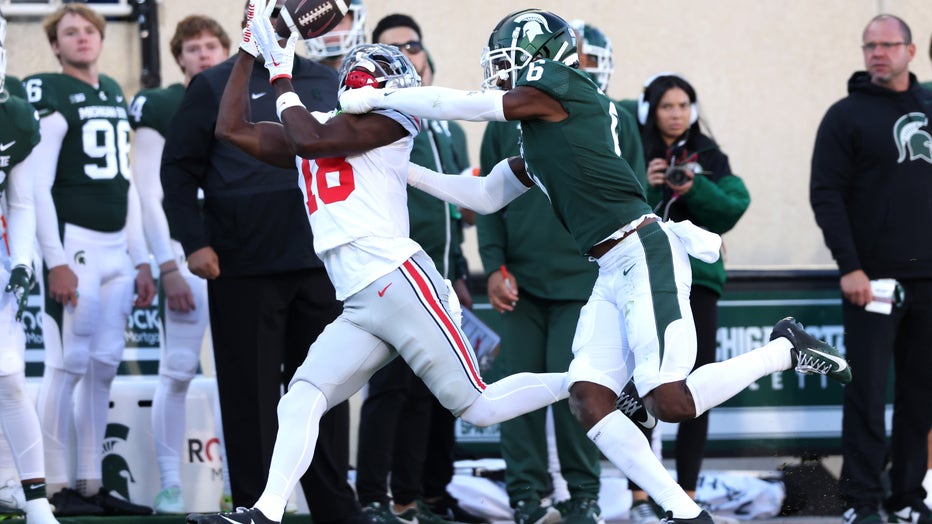 EAST LANSING, MICHIGAN - OCTOBER 08: Marvin Harrison Jr. #18 of the Ohio State Buckeyes catches a first half pass in front of Ameer Speed #6 of the Michigan State Spartans at Spartan Stadium on October 08, 2022 in East Lansing, Michigan. (Photo by Gr

Harrison had seven catches, including some acrobatic grabs while draped by a defender, for 118 yards and three scores. Emeka Egbuka had five receptions for 143 yards and a score, a 69-yard catch on Stroud's first throw after his Pick-6 in the second quarter.

Payton Thorne was 11 of 18 for 113 yards with an 18-yard touchdown pass to Jayden Reed to pull the Spartans within eight points early in the second quarter before they gave up 28 straight points in the lopsided game. Thorne, who also threw an interception, could not rely on a running game that gained just 7 yards against the Buckeyes.

Michigan State's disappointing season and the proximity to Ohio led to a lot of Buckeyes fans watching the game at Spartan Stadium.

Ohio State: The Buckeyes are the first Big Ten team to score 45-plus points in five straight games since Michigan did it, closing the 1946 season and picking it up again in 1947, and it will take quite a defense to slow them down.

Michigan State: A potentially promising season is crumbling for third-year coach Mel Tucker, who does not seem to have answers to fix his team's many problems on both sides of the ball.

Ohio State: Henderson, who was hit hard by cornerback Charles Brantley, initially tried to stay on the field before tapping his helmet to let coaches know he was hurt. He later jogged on the sideline and talked briefly with coach Ryan Day, who did put him back in the game with a 29-point lead midway through the third quarter. Henderson missed the previous game with an injury and his replacement, Miyan Williams, ran for five touchdowns. Williams and receiver Jaxon Smith-Njigba did not make the trip to Michigan State due to an injury.

Michigan State: Safety Jaden Mangham was taken to a hospital for evaluation after being carted off the field with an injury. Mangham appeared to take the brunt of a collision when he tackled Henderson late in the first quarter. As the cart approached the tunnel, Mangham flashed a thumbs up for the cheering crowd.

Ohio State: A bye week comes at a good time to rest a banged-up backfield before hosting Iowa on Oct. 22 and playing the next week at No. 10 Penn State.

Michigan State: Hosts Wisconsin, another struggling team that is led by an interim coach, in what seems like an opportunity to earn a desperately needed win.