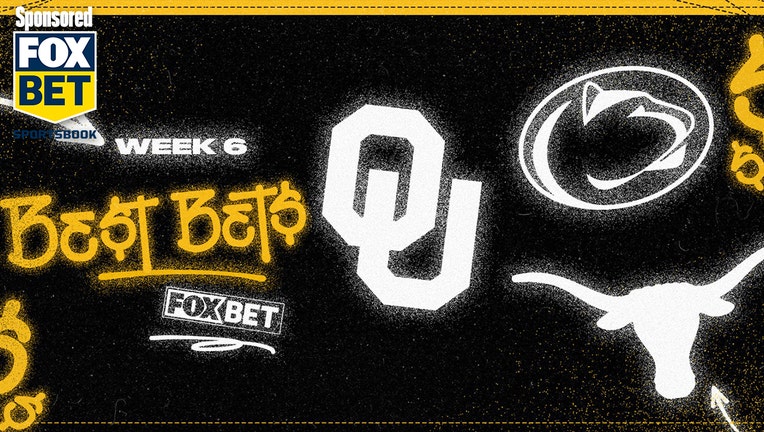 There's a fantastic weekend of college football action coming up! We get ranked conference matchups with the potential of playoff seeding at play. What more could you ask for as a fan or gambler?

Let's start in Iowa City for my best CFB bets of the week, with odds via FOX Bet.

In the first Big Ten top-five matchup not featuring Ohio State since 1997, I'm taking the points with the visiting Nittany Lions.

Both defenses are elite. Iowa's defense ranks second in the country in points per game, points per drive, and adjusted air yards per attempt. The Hawkeyes are fourth in explosive play rate and are tied with Hawaii (of all schools) in forced turnovers with 16 in their first five games. Penn State's defense ranks fourth in points per drive, eighth in adjusted air yards per attempt, and 10th in explosive play rate. Both these defenses will play excellent this weekend. I have no doubt.

So the question is, who can score enough points to win this game? The answer is Penn State.

Iowa's offense is not good. The Hawkeyes have scored a ton of their points off turnovers, with 68 of their 166 points coming via a defensive score or after a turnover.

Iowa's success rate on offense is 114th in the nation. Its explosive play rate is 112th. Despite having the best center in college football, the Hawkeyes aren't particularly good at rushing the football, with efficiency hovering around 100. Traditional stats like yards per carry come in lower, with Iowa ranked 113th in the nation.

The Iowa offensive line is near the bottom in pressure rate, and the offense is ranked 90th at converting third downs. Oof.

This team has benefited from turnovers, and that's an unreliable way to handicap a contest. I can't assume they will continue to have this much turnover luck.

As for Penn State, its offense isn't a killer, but it has slowly improved as the season has gone on. The Nittany Lions rank 50th in points per drive, with an offensive success rate sitting at 47th in the country. They do generate some explosive plays, ranking 36th in plays over 20 yards.

PSU does protect the quarterback enough to enable quarterback Sean Clifford to have adjusted air yards per attempt at 8.6. It is not particularly good on third down – actually behind Iowa in that category – but the Nittany Lions are sixth in the country at first downs on first or second down. Clifford has improved each week, completing 67% of his passes after a rough Week 1 contest against Wisconsin.

Penn State has won nine in a row dating back to last season, and James Franklin's squad has covered seven of its last 11 games as underdogs. In a game with two elite defenses, I'll take the points and the better offense.

One of college football's best rivalry games is here again, as Oklahoma and Texas meet in Dallas for the Red River Showdown. While the Sooners have won six of the last eight matchups, the Longhorns have covered seven in a row before losing by eight last season in four overtimes. While Texas getting three plus the hook seems enticing, the total is where my money is at.

Both of these teams have struggling offensive lines, due to general play and injuries. Texas will be without its left guard after getting hurt against TCU. The Longhorns moved their starting RT to LG and inserted a new RT. That's not ideal, as you've now lost one starter and moved two guys into new positions. And while this might not be an issue in the run game, as Texas boasts one of the best in the country behind the best runner in the sport, Bijan Robinson, it will be an issue if the Longhorns have to pass the ball.

The Longhorns' sack rate is one of the worst in college football, and if the Sooners can get pressure upfront, they can spend time focused on stopping Robinson and backup Roschon Johnson. Also worth noting, Oklahoma's defense ranks 29th in rushing success and 24th in pressure rate. While its offense has struggled, this defense has picked up the pace significantly over the season. I worry Texas will have a lower offensive output due to its offensive line woes.

On the other side, Oklahoma's offensive line isn't what it's been. And that's no knock on the Sooners, as it's hard to keep replacing NFL-caliber offensive lineman each year. With all these new players in the lineup, there have been communication issues early in the season.

The Oklahoma offense scored just three points in the second half against Tulane, only 23 total against Nebraska, and 16 against West Virginia. Last weekend, the Sooners simplified their offense and appeared to bounce back against Kansas State for 37 points. However, I have concerns about this offense heading into this game.

Totals get busted when teams can score quickly, and Oklahoma ranks only 64th in explosive play rate while being 115th in explosiveness on standard downs. Think first-and-10, second-and-5. This puts OU in tough spots on third down, as it averages nearly eight yards on third downs.

The Longhorns have some dudes on defense that can make life challenging for the Sooners if they are always in third-and-long. Texas has the second-ranked defense on third-and-long with a blitz success rate ranked 22nd. The Longhorns will attempt to make life hell for this offensive line, which could make things rough for Oklahoma quarterback Spencer Rattler.

I see a game with both teams scoring in the 20s. Give me the under in this spot.

The Bulldogs have the best defense in the country, as they’ve allowed only 23 points all season and just 110 passing yards per game. Georgia just shut out Arkansas and now face a worse offense in Auburn, led by quarterback Bo Nix.

Nix is averaging 195 yards per game, going over that number just twice in five games this season. I do not expect him to have a great weekend against this Bulldogs' defense.

One can argue Georgia’s team and/or defense might have a letdown after beating Arkansas in a big game, but I’ll make the argument a defense like that doesn’t have letdowns. It is now trying to set records, like the least amount of points allowed and the least amount of passing yards allowed. This defensive unit is dialed in.

The Auburn offensive line has not played well and Georgia will be able to pressure Nix all game. Give me Nix under passing yards.

Geoff Schwartz played eight seasons in the NFL for five different teams. He started at right tackle for the University of Oregon for three seasons and was a second-team All-Pac-12 selection his senior year. He is an NFL analyst for FOX Sports. Follow him on Twitter @GeoffSchwartz.