Corum is not ready to celebrate.

"I don’t know how good we are," he acknowledged. "We look good. I feel like we’re going to be great, but I can’t tell yet.

"I can tell from the look of things, the sky is the limit for this offense." 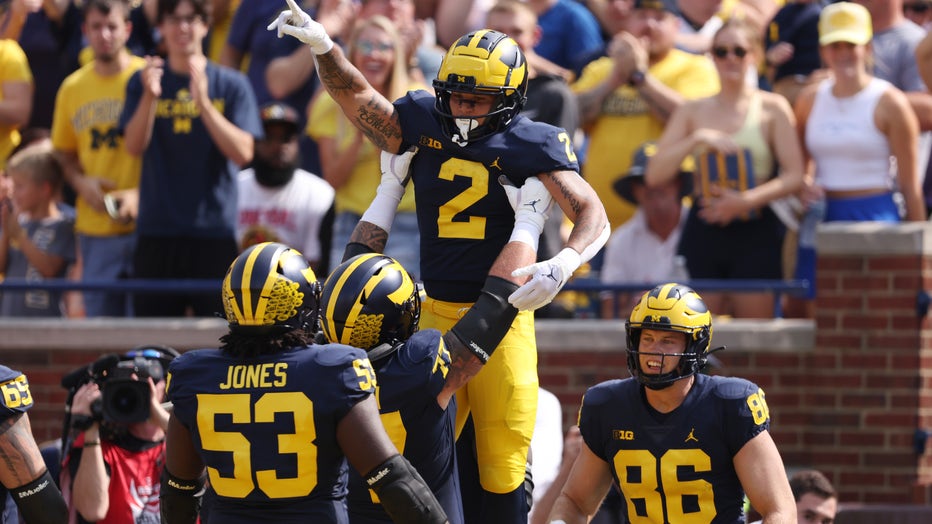 ANN ARBOR, MICHIGAN - SEPTEMBER 17: Blake Corum #2 of the Michigan Wolverines celebrates a first half touchdown with his teammates while playing the Connecticut Huskies at Michigan Stadium on September 17, 2022 in Ann Arbor, Michigan. (Photo by Grego

Corum started the scoring barrage with a 20-yard run on the game’s opening drive and had three 1-yard scores before halftime. His 11-yard touchdown late in the third quarter tied the single-game school record set by Ron Johnson in 1968 and equaled by

The Wolverines (3-0) led 38-0 at halftime before coasting in the second half of a game that looked a lot like their first two tune-ups, when they beat

Is Michigan prepared to begin defending its Big Ten championship?

J.J. McCarthy was 15 of 18 for 214 yards, a week after Harbaugh said he had won the quarterback competition.

"My mind isn’t racing anymore," the sophomore said. "Everything’s just slowing down. That’s something that has changed from last year to this year."

Big Ten championship-winning quarterback Cade McNamara entered late in the first half and was roughed up. He was sacked on the first snap and didn't play in the second half due to a leg injury.

"He’s probably going to be out for a few weeks," Harbaugh said.

Without the senior available in the lopsided game, Harbaugh gave several reserve quarterbacks a chance to play.

The Huskies (1-3) had just 64 yards of offense in the first half, had a punt blocked and gave up a punt return for a touchdown over the opening 30 minutes.

"Tough loss, a really good team, a team that is a contender for a national championship and they served it up pretty good to us," first-year coach Jim Mora said. "The thing I was proud of is the attitude and the effort of our young men. They kept fighting. This is not the situation where you want to play a lot of young guys, but we got to play a ton of young guys and we’re going forward with them."

Connecticut freshman Zion Turner was 4 of 16 for 17 yards and had 42 yards rushing. The Huskies finished with just 110 yards of offense, going 2 for 14 on third down and earning just six first downs.

"We’ve got to continue to work hard and believe we can make progress regardless of the score," Mora said.

In the second quarter, Michigan special teams ace Caden Kolesar blocked a punt to set up one of Corum's touchdowns.

"(Kolesar) ran around the edge, he took the perfect amount of steps and the exact right angle," Harbaugh said.

"It’s very rare to get a block and a return for a touchdown," Harbaugh said.

UConn: Mora is trying to turn around an independent program that won only one game over two years and had just 10 victories during the six seasons prior to his arrival.

Michigan: Harbaugh's team has not been tested, but it has not played down to inferior competition before starting Big Ten play.

"We’re always competing with ourselves no matter who we’re playing," McCarthy said.

UConn: RB Nate Carter left with a shoulder injury after he had six carries for 21 yards.

Michigan: LT Karsen Barnhart, who started the opener, RB Donovan Edwards and LB Nikhai Hill-Green did not play due to undisclosed injuries.

The Wolverines likely will be ranked No. 4 for the second straight week in

Michigan: In its fourth straight home game, faces Maryland in the Big Ten opener for both teams on Saturday.