TORONTO - Cade Cunningham had 22 points and 12 rebounds, Jerami Grant scored 26 and the Detroit Pistons held off Toronto 108-106 on Thursday night for their sixth straight victory over the Raptors.

Saddiq Bey scored 23 points, Hamidou Diallo had 11 and Isaiah Stewart added 10 as the Pistons gave coach Dwane Casey another win against the team that fired him in May 2018.

Detroit swept the season series from Toronto for the second straight year, the first time the Pistons have done that.

Scottie Barnes had 21 points and 10 rebounds, Pascal Siakam scored 28 points, Precious Achiuwa had 18 and Gary Trent Jr. 14 for the Raptors, who have lost three of five. 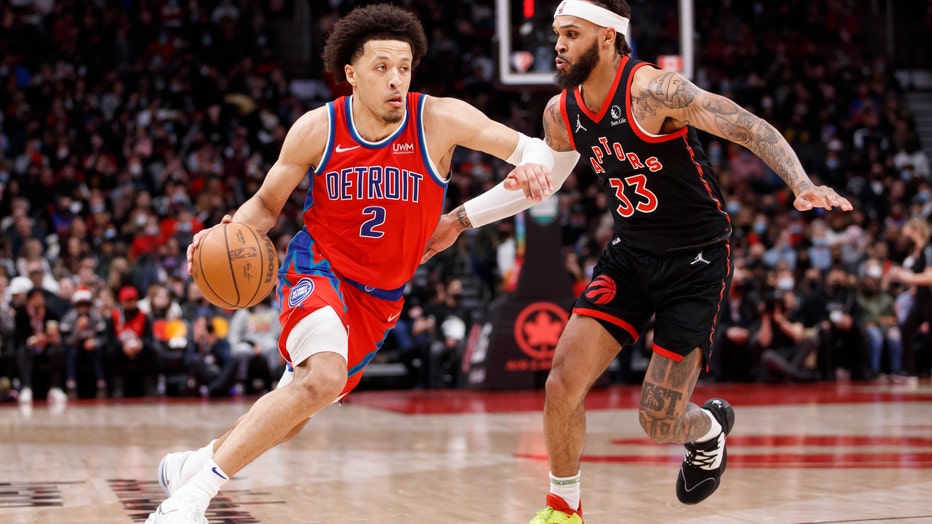 TORONTO, ON - MARCH 03: Cade Cunningham #2 of the Detroit Pistons dribbles the ball against Gary Trent Jr. #33 of the Toronto Raptors during the first half of their NBA game at Scotiabank Arena on March 3, 2022 in Toronto, Canada. NOTE TO USER: User

After a timeout, Cunningham missed a 3 and Achiuwa was fouled, but only made his second free throw, cutting the deficit to one. At the other end, Bey’s driving shot gave Detroit a 108-105 edge with 14.2 seconds to go.

Cunningham blocked Trent’s shot and Barnes came up short from 3 but Achiuwa was fouled going for the rebound, going to the line with 0.7 seconds to play. He made the first but missed the second as time expired.

Raptors All-Star guard Fred VanVleet sat for the fourth time in six games because of a sore right knee, forward OG Anunoby missed his fifth straight game because of a fractured right ring finger, and forward Thad Young was out with a non-COVID-19 illness.

Toronto shot 7 for 26 from 3-point range. The Raptors went 7 for 23 from long distance in Tuesday’s home win over Brooklyn.

Cunningham scored 10 points in the first quarter and Detroit was 5 of 11 from 3-point range to lead 31-22 after one. Grant scored nine points in the second but Barnes had eight for the Raptors, who trailed 60-57 at halftime.

Grant and Cunningham each had eight points in the third as Detroit outscored Toronto 31-20 to take a 91-77 lead to the fourth.

Raptors coach Nick Nurse was ejected with 2:27 left in the third after picking up two technical fouls for arguing a foul call on guard Dalano Banton.

Barnes stayed down briefly after hitting the back of his head on the court after colliding with Stewart on a dunk attempt in the first. Later in the quarter, Siakam went down hard after battling Kelly Olynyk for a rebound. Barnes and Siakam both stayed in the game.

Raptors: Nurse said Anunoby is expected to miss two weeks. … Barnes was named Eastern Conference rookie of the month for February. … Trent shot 0 for 7 in the first quarter. He finished 4 for 23, and went 3 for 15 from 3-point range.