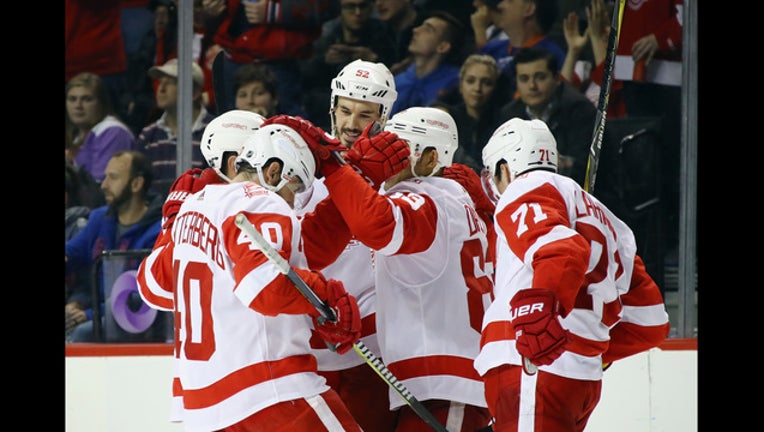 NEW YORK, NY - DECEMBER 19: The Detroit Red Wings celebrate a goal by Trevor Daley #83 at 10:03 of the third period against the New York Islanders at the Barclays Center on December 19, 2017. (Photo by Bruce Bennett/Getty Images)

NEW YORK (AP) - After so many close losses recently, the Detroit Red Wings were glad to get a win when they didn't play their best.

Trevor Daley scored the go-ahead goal midway through the third period and the Red Wings rallied to beat the New York Islanders 6-3 on Tuesday night for just their third victory in 13 games.

Martin Frk, Gustav Nyquist, Anthony Mantha, Mike Green and Luke Glendening also scored for the Red Wings, who entered 2-5-5 in their last 12. Henrik Zetterberg and Dylan Larkin each had three assists, and Petr Mrazek made 34 saves.

"We've been standing after many games and talking about lucky bounces and I've been (saying) you deserve your own luck and it usually evens out," Zetterberg said. "Tonight, we had luck on our side."

The score was tied 3-all in the third period - after Detroit was outshot 23-4 in the second - before Daley scored the tiebreaker into the top left corner with 9:57 left for his second of the season.

Green scored into the top right corner to give the Red Wings a two-goal lead with 5:48 remaining, and Glendening added an empty-netter with 29 seconds left.

"We were fortunate to be in the game," Detroit coach Jeff Blashill said. "We came out in the third and played great. We really played hard and we played to win. ... We've played lots of really good games this year where we haven't won, and this wasn't our best game but we found a way to win."

Josh Bailey had a goal and an assist, and Anders Lee and Ryan Pulock also scored for the Islanders, who lost for the sixth time in their last eight games (2-5-1). John Tavares had two assists and Thomas Greiss stopped 16 shots.

"We played right into their hands," Tavares said about the third period. "We were a little sloppy and we got too aggressive at times. ... It's kind of been the same story. We play some good hockey and then we give up too many point-blank chances and rely on our goalies to have to really make some Grade-A saves multiple times."

With the Islanders reportedly set to be awarded the right to build a new arena at Belmont Park in a news conference on Wednesday, there were brief chants of "Bel-mont! Bel-mont!" after the national anthem in Barclays Center. The Islanders are in their third season at the Brooklyn arena after spending the franchise's first 43 seasons at Long Island's Nassau Coliseum.

Trailing 2-1 after one period, New York controlled play in the second, including an 18-1 advantage on shots through the first 12 minutes.

"We didn't feel good out there, for sure," said Detroit's Frans Nielsen, in his second year with the Red Wings after spending his first 10 NHL seasons with the Islanders. "They definitely took it to us in that second period."

Pulock tied the score on the power play at 2:03 with a one-timer from the left circle.

New York then took a 3-2 lead with another power-play goal with 7:01 remaining in the second after some slick puck handling by Mathew Barzal. Bailey sent a pass to Barzal in the left circle, and as the rookie center skated forward he sent the puck back between his skates and then tapped it across in front to Bailey, who put it in for his 10th.

Mantha tied it for the Red Wings with 4:45 left in the period. Zetterberg had a chance at an open net on the left side as Greiss was sprawled on the ice while stopping the initial shot. However, Zetterberg's backhander went across the crease, and Mantha knocked it in from behind the goal line off Greiss while the goalie was still sprawled on his stomach facing the goal.

Lee got the Islanders on the scoreboard first 6:32 into the game, taking a pass in front from Tavares, turning and beating Mrazek on the blocker side with his 21st.

The Red Wings tied it three minutes later as Frk deflected Jonathan Ericsson's pass from the left side past Greiss for his seventh.

Nyquist gave Detroit the lead with 3:11 left in the opening period as he beat Greiss between his right shoulder and the post for his ninth.

NOTES: Zetterberg has points in four straight games (one goal, five assists). ... The teams play two more times this season - back in Brooklyn on Feb. 9 and at Detroit in the season finale on April 7. ... Tavares, Lee and Bailey have combined for 29 points in the last six games. Bailey has five goals and six assists, Tavares two goals and nine assists, and Lee four goals and three assists. ... New York lost for the first time this season when scoring first after coming in 11-0-0.

Red Wings: At the Philadelphia Flyers on Wednesday night in the second of a four-game trip.