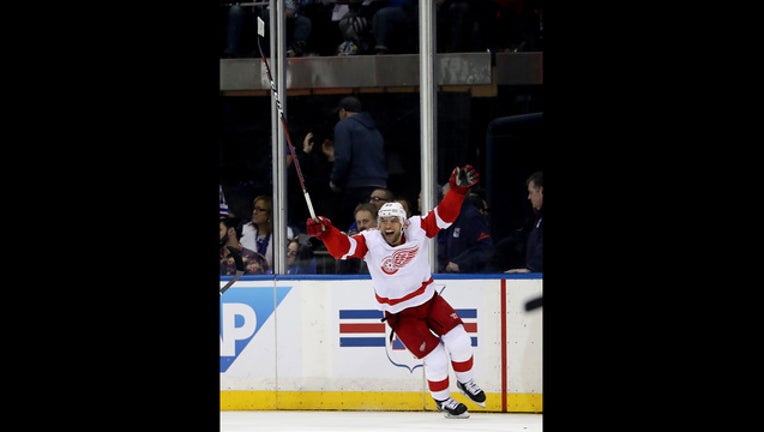 NEW YORK (AP) - With time winding down in overtime, Trevor Daley knew he needed to get in position in front of the net.

Daley was in the right spot and tipped in Frans Nielsen's pass with 5.6 seconds showing on the clock to lift the Detroit Red Wings to a 3-2 victory over the rebuilding New York Rangers on Sunday night.

"I heard the bench saying there was only 10 seconds left so I knew we had to get it to the net," Daley said. "I went to the net and Nielsen made a great play. I just got lucky and put my stick on it and it went in."

Andreas Athanasiou and Darren Helm also scored for the Red Wings, and Jimmy Howard stopped 36 shots. Detroit improved to 5-3-2 in its last 10 games and pulled into a tie with Florida five points behind Columbus for the final playoff spot in the Eastern Conference.

Ryan Spooner, one of the players acquired from the Bruins, had two assists in his debut for the Rangers, who are 0-6-1 in their last seven and have just three wins in the last 17 games (3-13-1).

New York's Chris Kreider hit the crossbar on a backhand with 55 seconds left in the extra period.

"We just can't catch a break right now," Lundqvist said. "We're getting some good looks and creating some good chances to win. ... The good thing is that I think it was a step forward for us, the way we played the game."

Fast tied it when he put in the rebound of Kevin Hayes' shot from the left side with 8:44 left in regulation for his 10th of the season.

Red Wings coach Jeff Blashill liked the way his team pulled out the victory in overtime, one night after beating Carolina at home.

"We think we've been in position to do this type of thing, to go on runs, to be a playoff team," he said. "We haven't done it enough. It doesn't matter what you think, it matters what you prove, but we believe a lot in this team."

Howard made four great saves - one on Brady Skjei and three successive tries by Pavel Buchnevich - during a flurry by the Rangers to preserve Detroit's lead with 11:20 remaining. The puck went in the net but officials waved it off, saying Mika Zibanejad kicked it in, and the call was confirmed after a long video review.

The Red Wings extended their lead to 2-0 about 4 1/2 minutes into the second as Helm got the puck after Rangers defenseman John Gilmour fell down near the blue line, skated up the ice and beat Lundqvist from the right circle for his eighth.

Miller got the Rangers on the scoreboard on the power play when he took a pass from Spooner and fired a slap shot from the left circle for his 13th at 7:51.

Athanasiou got the Red Wings on the scoreboard with seven seconds left in the first as he brought the puck up the right side with defenseman Rob O'Gara on him, and sent a shot from the left circle through O'Gara's skates and then through Lundqvist's legs for his 12th.

NOTES: Before the game, the Rangers honored Hall of Fame center Jean Ratelle by raising a banner with his name and No. 19 to the rafters at Madison Square Garden. Ratelle, who centered the famous GAG Line with Rod Gilbert and Vic Hadfield, had 336 goals and 481 assists in 861 games with the Rangers. ... The Rangers also got forward Matt Beleskey, prospect defenseman Ryan Lindgren and two draft picks from Boston in the Nash trade. ... Miller's goal was his first since Feb. 3 at Nashville. He had five assists in 10 games since. ... Detroit won two of the three meetings this season, with all three matchups going beyond regulation. ... Helm got his fourth goal and 10th point in his last 13 games. ... Athanasiou has two goals and two assists in his last four games, after totaling one assist in his previous 11.

Red Wings: At the St. Louis Blues on Wednesday night, the second stop on a five-game trip.

Rangers: At the Vancouver Canucks on Wednesday night to open a three-game trip to Western Canada.