Dickinson had four points in a 72-51 loss at

The 7-foot-1 center had not made or taken more than one shot beyond the arc before the Aztecs left him open and dared him to take his offense outside.

"The opportunity was there and he took full advantage of it," Wolverines coach Juwan Howard said.

Dickinson has spent a lot of time working on his 3-point shot, after NBA teams advised him to improve that part of his game when he withdrew from the draft. He praised team managers Andrew Wolfe and Alex Assad for rebounding for him whenever he wanted to practice. 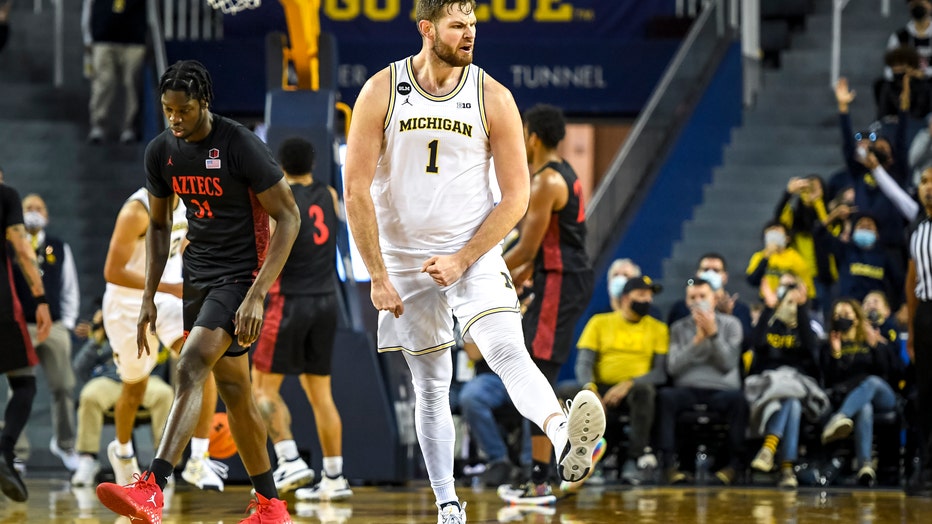 ANN ARBOR, MICHIGAN - DECEMBER 04: Hunter Dickinson #1 of the Michigan Wolverines reacts after shooting a 3-pointer against the San Diego State Aztecs during the first half at Crisler Arena on December 04, 2021 in Ann Arbor, Michigan. (Photo by Nic A

id. "I'm so thankful for them because they really pushed me."

San Diego State coach Brian Dutcher said Dickinson and his teammates were given open looks on the outside by design.

"We rolled the dice and they made a lot of 3s," Dutcher said.

The Aztecs (5-3) were led by Matt Bradley, who scored 22 points. The senior guard didn’t get much help because none of his teammates scored more than eight points.

"They sped us up a bit going from the press and zone and then under 15 on the clock, they were going to man to man," Bradley said. "It was something we couldn’t figure out until later on."

"Dutch is family," said Howard, who played with the Fab Five at Michigan. "Dutch is one of the main reasons why I chose Michigan. He said Michigan is going to change your life and it’s going to be the family you’re looking for and that you’re missing at home."

Dutcher 10 seasons as an assistant at Michigan from the 1988-89 season, when Fisher led the school to its only national title, through through 1997-98.

"Michigan has done a great job of rebuilding this (Crisler Center) and making it new," Dutcher said. "This was a work trip. There will be another time I’ll let Juwan show me around."

GAVE IT A GO

Wolverines freshman Moussa Diabate was limited to the first 7 minutes because he was not feeling well.

"His temperature was a little high coming in," Howard said. "The kid is such a competitor he wanted to be out there for his teammates."

San Diego State guard Lamont Butler, who is averaging 9.7 points and two assists, missed the game with an ankle injury and his absence was difficult to overcome.

"Lamont has been a lifetime point guard," Dutcher said. "We miss Lamont, but we can’t cry about it."

San Diego State: The team will be able to learn a lot from playing a ranked Big Ten team on the road to help it against Mountain West competition.

"It’s a growing experience," Dutcher said. "We didn’t take care of the ball well enough to win on the road."

Michigan: The reeling team bounced back with a win that it desperately needed after losing three of their previous five games.

Losing by 21 points to the Tar Heels will likely lead to Michigan being unranked on Monday.