Hunter Dickinson scored 20 points, including the tying and winning scores, as Michigan scrapped past Penn State 62-58 in a low-scoring grinder of a Big Ten Conference opener on Sunday.

It was a breakout game for Michigan's freshman starting center, who pulled down seven rebounds and blocked three shots. Dickinson scored 11 of his career high points in the second half as Michigan fought to regain the lead it had held much of the game. 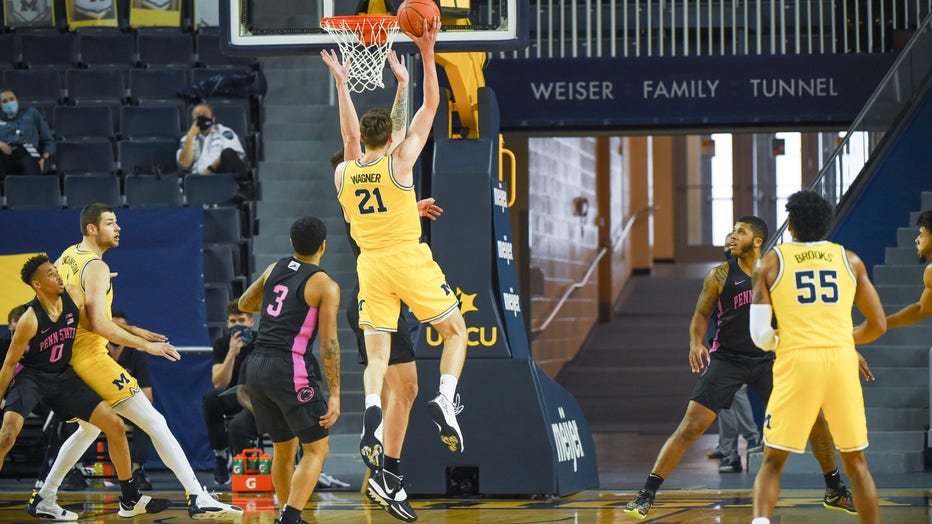 ANN ARBOR, MICHIGAN - DECEMBER 13: Franz Wagner #21 of the Michigan Wolverines shoots the ball over a Penn State Nittany Lions defender during the first half of a college basketball game at Crisler Arena on December 13, 2020 in Ann Arbor, Michigan. (

Penn State's Sam Sessoms had lifted the Nittany Lions into a 58-56 lead converting a three-point play with just under three minutes left.

Dickinson took a pass inside from Mike Smith on the next possession and threw down a dunk to tie, then scored a layup after a Sessoms turnover for a 60-58 lead that stood up for the last 1:21.

Penn State missed two layups and a desperation 3-pointer in the last 31 seconds.

Eli Brooks scored 12 for the Wolverines (6-0, 1-0) and Isaiah Livers scored 10, going a perfect 8-for-8 from the free-throw line, making the final two of the game with five seconds left.

Michigan shot 20 for 45, finishing more than 20 points below its season average.

Izaiah Brockington scored 14 to lead Penn State (3-2, 0-1) while Sessoms and Myreon Jones added 10 each. The Lions picked up seven steals and scored 18 points of 16 Michigan turnovers.