Howard, who averages 15.4 points, 2.9 rebounds and 2.5 assists per game, injured his left ankle late in the first half and did not return to the game. He was seen in a walking boot on the Michigan bench during the second half.

After the Wolverines led for most of the second half, Pharrel Payne’s layup drew the Golden Gophers within 55-51 and a free throw by Ta’lon Cooper made it 55-52 with 35 seconds left. But Minnesota’s Jamison Battle was called for a technical foul, Will Tschetter converted the free throws, and Michigan led by five, still with 35 seconds remaining. Michigan added 3 of 4 from the line in the final 20 seconds to preserve the win. 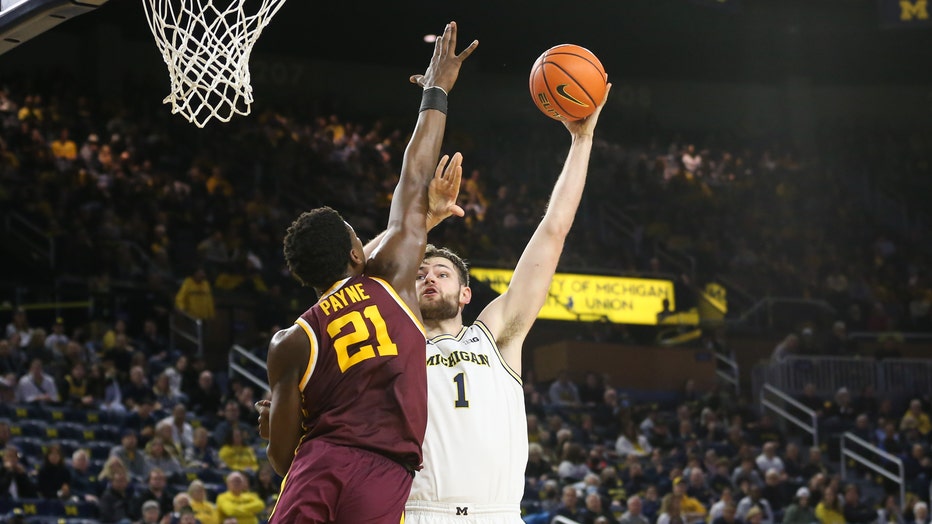 The score was last tied at 33 with 13:42 remaining before McDaniel hit a 3-pointer and Dickinson converted a three-point play for a six-point lead and Michigan led the rest of the way.

Minnesota scored 16 points in the first seven minutes of the game and led 16-6. After back-to-back baskets by Dawson Garcia and Ta’lon Cooper the Golden Gophers led 20-10 with 10:16 remaining in the half.

Minnesota would score only three more points before halftime, making 1 of 13 shots in the final 10 minutes. The Wolverines closed the half on an 13-3 run, getting six points from Dickinson and five from McDaniel.