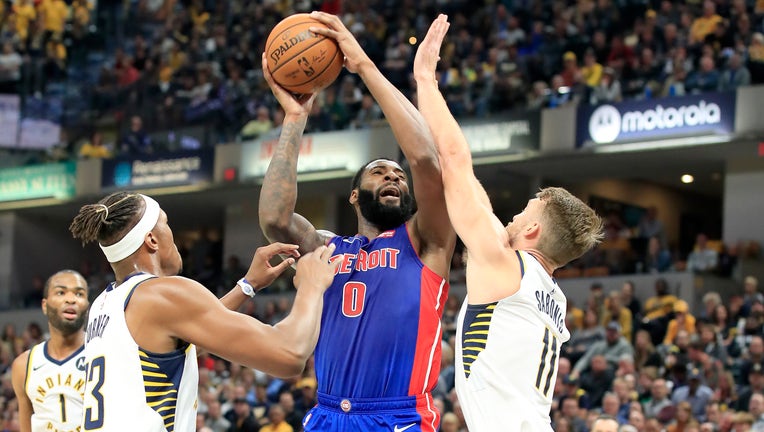 INDIANAPOLIS, INDIANA - OCTOBER 23: Andre Drummond #0 of the Detroit Pistons shoots the ball against the Indiana Pacers at Bankers Life Fieldhouse on October 23, 2019 in Indianapolis, Indiana. NOTE TO USER: User expressly acknowledges and agrees that

INDIANAPOLIS - Andre Drummond softened up the perimeter by hammering away in the middle. Luke Kennard finally took advantage late.

It was quite an opening-night combination for the Detroit Pistons.

Drummond scored 32 points, grabbed 23 rebounds and blocked four shots while Kennard made half of his career-high six 3-pointers in the final six minutes to help the Pistons pull away for a 119-110 victory over the Indiana Pacers on Wednesday night.

"I'm glad he (Drummond) is on my team," Derrick Rose said after his Pistons debut. "It just feels good to win, especially the first game."

The Pacers had billed their opener as the debut of a new era complete with four new starters and a retro lineup with 6-foot-11 Myles Turner and 6-11 Domantas Sabonis playing alongside one another.

But Drummond and Kennard ruined the big unveil.

The league's three-time rebounding champ was a wrecking ball right from the start, knocking down 12 of 18 shots and even making his last eight free throws after missing the first two. Kennard warmed up late, scoring 16 of his career-high 30 points in the final 11 minutes.

Indiana never recovered. Sabonis had 27 points and 13 rebounds and Malcolm Brogdon added 22 points in his first game with the Pacers.

"We got outworked tonight, I think," Turner said after scoring 25 points. "That's one thing we hang our hat on here, outworking people. I think we got outworked and they were a little grittier than we were."

It was far from pretty, though.

The teams combined for 33 turnovers and 29 fouls resulting in a back-and-forth game in which neither team seized control for long.

Indiana extended a 55-54 halftime lead to 73-64 midway through the third quarter then nearly gave it all away as the Pistons closed to 86-83 after three.

"I love the way we fought," Kennard said. "That was great to come into an atmosphere like this, opening night, for a team on the road it's not always easy to come away with a win.

Pacers: T.J. Warren was taken straight to the locker room with 3:46 left after taking a hard spill following an offensive foul. He finished with 10 points. .... Brogdon was 10 of 11 from the free- throw line, and Jeremy Lamb scored 10 points in his first game with Indiana. ... The Pacers were outrebounded 45-36 and lost on opening night for the first time in four years.

Two-time All-Star Victor Oladipo has participated in two five-on-five practices since he was cleared by team doctors late last week.

So far, coach Nate McMillan said Oladipo has had looked fine. But he's also likely weeks away from taking another big step.

"He looks OK out there," McMillan said, noting Oladipo is only practicing every other day. "He wants to play a little more but he's limited for what he can do for the next month or so before he gets re-evaluated."

Six-time All-Star Blake Griffin missed the game with an injured left hamstring and a sore knee.

And until he returns, the Pistons may find themselves cobbling together spare parts till he can return. But coach Dwane Casey had to like what he saw Wednesday.

When times get tough, that's when everyone looks to Blake," coach Dwane Casey said. "You know when you go a couple possessions without a basket, we usually look to Blake. So in those situations, who do we go to? I think that's what we have to find out."

Pacers: At Cleveland on Saturday night.