DETROIT - Jack Eichel scored just over a minute into the game and the Vegas Golden Knights never relinquished the lead as they beat the Detroit Red Wings 4-1 on Saturday night.

Phil Kessel had a goal and an assist, while Jonathan Marchessault and Reilly Smith also scored for Vegas, which won for the second time in five games. Adin Hill made 24 saves to record his first victory in his last four starts.

Oskar Sundqvist scored his third goal in two games, while Ville Husso stopped 21 shots for Detroit. The Wings lost in regulation for just the second time in eight games (4-2-2). 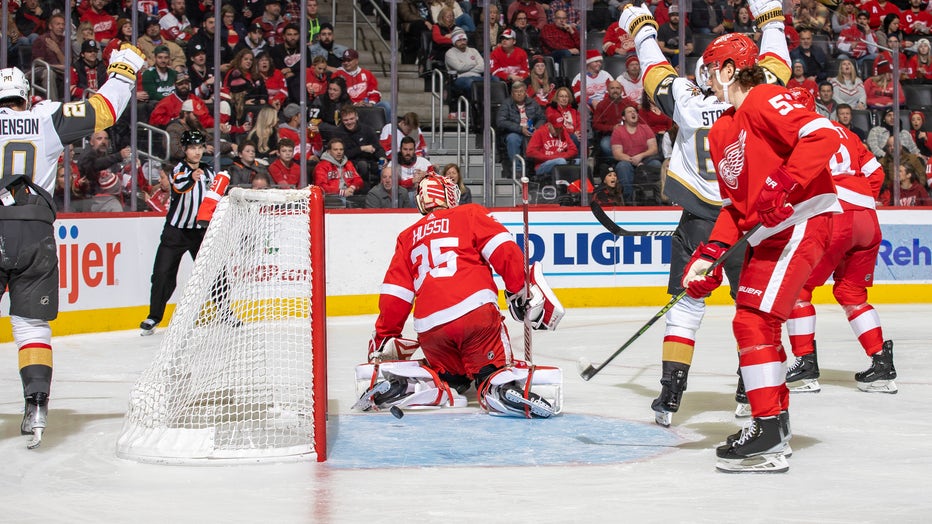 DETROIT, MI - DECEMBER 03: Jonathan Marchessault #81 of the Vegas Golden Knights (not pictured) scores a goal on Ville Husso #35 of the Detroit Red Wings during the second period an NHL game at Little Caesars Arena on December 3, 2022 in Detroit, Mic

Eichel scored his 13th goal when he slipped unchecked next to the goal post and Chandler Stephenson backhanded a pass to him for an easy tap-in at 1:04.

Vegas and Detroit are among the three least penalized teams in the league and the first penalty wasn’t called until 7:16 of the second period, when the Red Wings' Jordan Oesterle was whistled for tripping. Marchessault cashed in with his ninth goal, lifting the puck from the right circle over Husso's shoulder off a pass from Shea Theodore at 7:50.

The Red Wings also scored on their first power play as Sundqvist converted on a rebound off a shot by Dominik Kubalik with 8:23 left.

After serving out the next penalty, Kessel came out of the box and scored on a breakaway with 3:28 remaining in the middle period for a 3-1 Vegas lead. Kessel’s goal was the 17th of his career against Detroit in 31 games.

The Red Wings were playing their first game since F Tyler Bertuzzi, a 30-goal scorer last season, was placed on injured reserve. Bertuzzi was struck by a shot on Wednesday and suffered a hand injury that required surgery. ... Eichel has recorded a point in 15 of the last 18 games.. ... Vegas (eight games) and expansion Seattle (two games) are the only two teams that Detroit C Dylan Larkin hasn't scored against in his career.

Golden Knights: Att Boston on Monday night to wrap up a four-game trip.

Red Wings: At Columbus on Sunday to begin a four-game trip.