DETROIT - Adam Erne scored the go-ahead goal early in the third period, streaking rookie Lucas Raymond got his eighth of the season and the Detroit Red Wings defeated the St. Louis Blues 4-2 on Wednesday night.

Dylan Larkin and Robby Fabbri also scored for the Red Wings. Alex Nedeljkovic finished with 35 saves as Detroit snapped a four-game losing streak and improved to 5-2-2 at home.

Making his second straight start, Nedeljkovic turned in several highlight-reel stops — including a sprawling glove save with 13:05 left to preserve a one-goal lead.

Pavel Buchnevich and David Perron scored for the Blues, who were playing with a full and healthy roster for the first time this season. Perron’s goal snapped a 13-game scoreless drought. 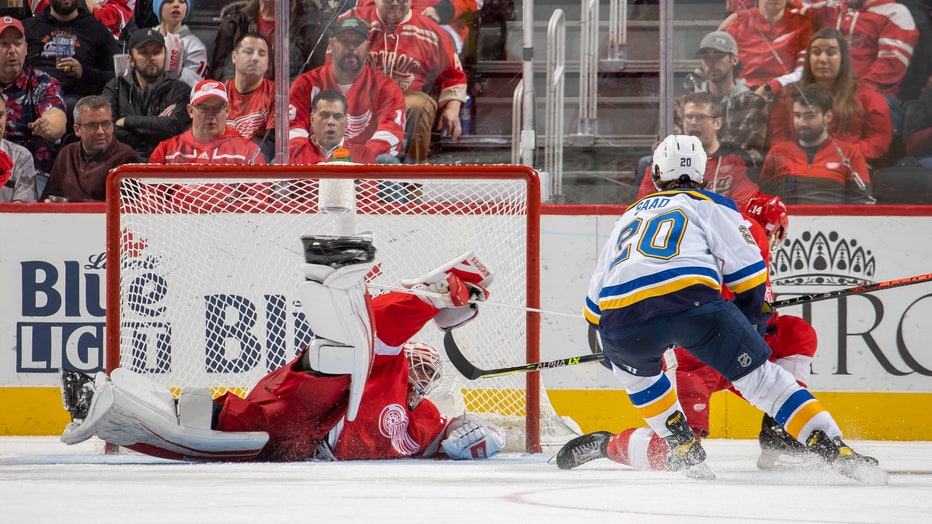 DETROIT, MI - NOVEMBER 24: Alex Nedeljkovic #39 of the Detroit Red Wings makes a diving save on Brandon Saad #20 of the St. Louis Blues during the third period of an NHL game at Little Caesars Arena on November 24, 2021 in Detroit, Michigan. Detroit

It was the sixth loss in eight games for the Blues, who fell to 10-7-2 and sit in a second-place tie in the Central Division.

Fabbri had two points against his former team, including an empty-net goal to seal the win. It was the first time the Red Wings center faced the Blues since being traded to Detroit on Nov. 6, 2019.

The Blues opened the scoring with a power-play goal from Buchnevich, who sent a one-timer from Jordan Kyrou past Nedeljkovic midway through the first period.

Raymond, who leads NHL rookies in scoring, tied it a few minutes later with a breakaway goal for his team-leading 20th point and 11th in the past 11 games.

Larkin got his team-leading 10th goal on Detroit’s first shot of the second period to break a 1-all tie at 7:45. It was his sixth goal in his last six games.

Blues: Visit the Chicago Blackhawks in the first of a back-to-back Saturday.