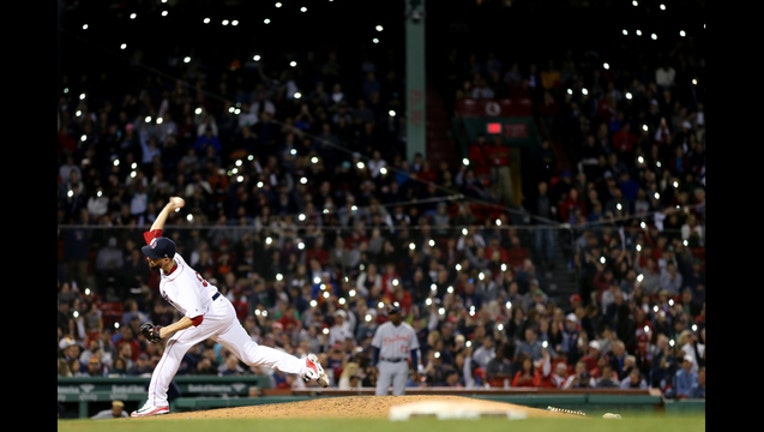 BOSTON, MA - June 6: Fans shine the lights on their cell phones in the stands as Matt Barnes #32 of the Boston Red Sox pitches against the Detroit Tigers during the seventh inning at Fenway Park on June 6, 2018. (Photo by Maddie Meyer/Getty Images)

It started to grow with one out in the seventh of Boston's 7-1 win and circled the stands when Detroit's Niko Goodrum took a called third strike from pitcher Matt Barnes.

Before Nicholas Castellanos stepped to the plate, he chatted with plate umpire Mike DiMuro. Detroit manager Ron Gardenhire also came out to talk with DiMuro, who walked over to Boston's dugout.

"You ever tried to hit with a light like that in your face? It's not supposed to happen," Gardenhire said. "The umpires should have, in my opinion, stopped it right away. They see it happen - it's right in dead center field.

"The fans are just having fun. I get it. But when it's in dead center field, my hitters are looking right into it. It's dangerous. It's very dangerous, if you've ever been trying to hit with a light in your face. So, we just couldn't let that happen."

Red Sox security asked fans in the center-field bleachers to stop using the phones as flash lights, and play resumed.

Castellanos then singled to center.

Cora said the umpires asked him if they could find a way to make it stop, but security had taken care of the problem.