Michael Rasmussen had the tiebreaking goal at 9:11 of the third period for Detroit, Dylan Larkin had two assists and Thomas Greiss finished with 32 saves. Red Wings coach Jeff Blashill got his 200th victory.

Detroit won for the second straight night after beating Boston 5-3 on Tuesday.

Mark Scheifele scored for the Winnipeg, which has lost three straight. Connor Hellebuyck made 32 saves.

The Jets outshot the Red Wings 13-5 in the opening period, with Greiss stopping some quality Winnipeg scoring chances. The goalie stood up to a Schmidt one-timer, twice denied Paul Stastny in close and made a glove save on Blake Wheeler’s breakaway. 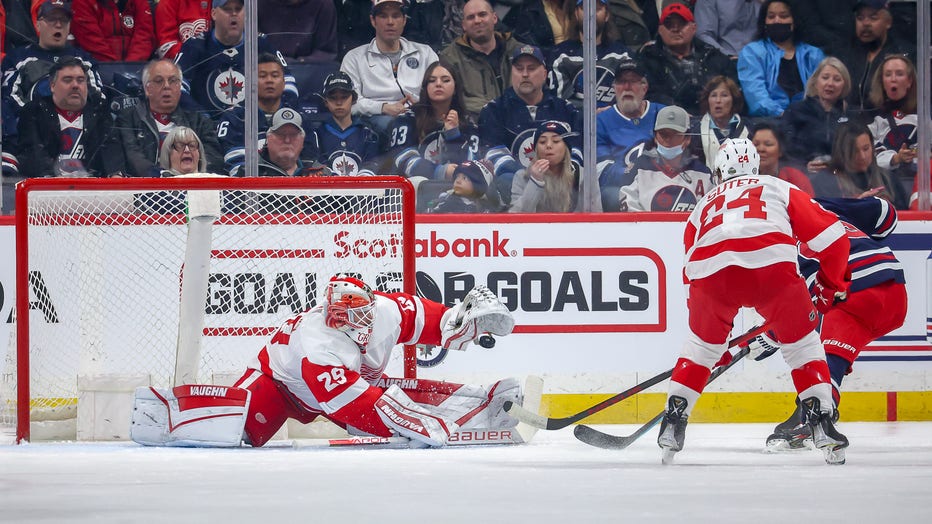 WINNIPEG, MB - APRIL 6: Goaltender Thomas Greiss #29 of the Detroit Red Wings makes a glove save on a shot by Paul Stastny #25 of the Winnipeg Jets during first period action at the Canada Life Centre on April 6, 2022 in Winnipeg, Manitoba, Canada. (

The Jets pressured the Red Wings through most of the first period, but Winnipeg’s fortunes unexpectedly changed when it went on the power play with 1:41 left. Larkin got the puck and quickly sent a pass to the side of the net for Gagner, who beat Hellebuyck with 1:20 remaining. That was Gagner's 500th point.

It was the third straight game the Jets have given up a short-handed goal.

Schmidt factored in on Winnipeg’s tying goal, as this time his shot from the point was deflected into the net by Scheifele at 6:01 of the second.

The Jets looked like they took the lead when Wheeler deflected in Dylan DeMelo’s shot at 9:44, but the Red Wings successfully challenged for offside and the goal was nixed. The Wings responded with a pair of shots that hit the post, one from Lucas Raymond and the other by Jakub Vrana on a breakaway.

Detroit got its second power play of the game at 5:15 of the third, but Hellebuyck turned aside the three shots he faced.

After Rasmussen broke the tie when he picked up a loose puck in the crease, Jets forward Zach Sandford was dinged with a four-minute double minor for high-sticking with 6:44 remaining in the game.

Gagner put his 11th goal of the season into an empty net with 37 seconds to go.

Jets leading-scorer Kyle Connor and defenseman Nate Schmidt returned to the lineup after their stints in COVID-19 protocols.

Jets: Host Colorado on Friday night to wrap up a three-game homestand.