ARLINGTON, Texas - ARLINGTON, Texas (AP) — Adolis Garcia struck out during a Texas rally that fell short in the ninth inning, ending his 23-game hitting streak as the Detroit Tigers held off the Rangers 9-8 Sunday.

Garcia’s streak was the longest in the American League this season. He went 0 for 3 with two walks and fell one game short of matching the longest hitting string ever by a Cuban-born big leaguer, set by Rafael Palmeiro in 1994 for Baltimore.

It was the fifth-longest streak in Rangers history.

"In the ninth inning, I wasn’t thinking about the streak," Garcia said. "I was thinking about winning the game. I wanted to get something on the barrel. 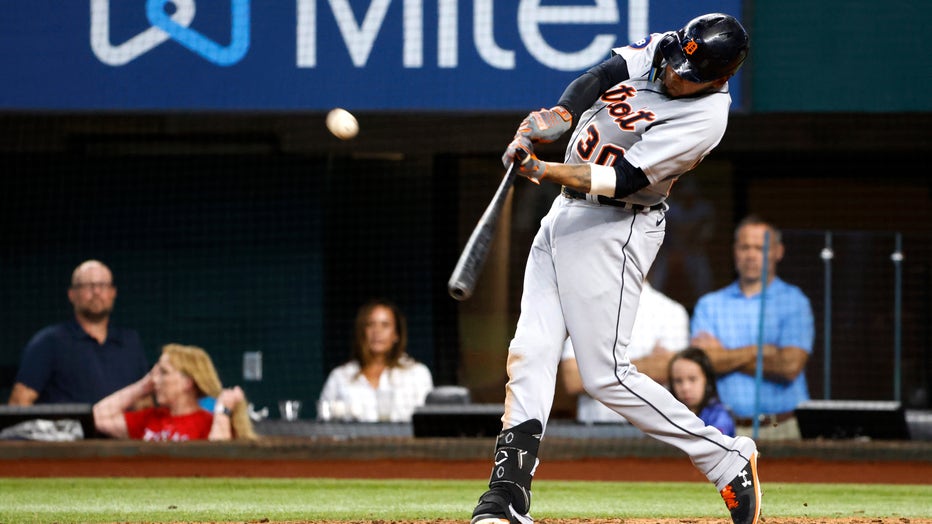 ARLINGTON, TX - AUGUST 28: Harold Castro #30 of the Detroit Tigers hits a three-run double against the Texas Rangers during the sixth inning at Globe Life Field on August 28, 2022 in Arlington, Texas. (Photo by Ron Jenkins/Getty Images)

"They tried to use the streak against me. They knew I wanted to hit, and they didn’t throw me anything easy," he said.

Harold Castro drove in five runs and Jeimer Candelario homered for the second straight day as the Tigers built a 9-0 lead in the sixth inning. Detroit won two of three from Texas and is 2-0-2 in its last four series.

"We won the series, so you always take that out of it," Tigers manager A.J. Hinch said. "Obviously the last couple innings got away from us, and we didn’t do ourselves a lot of favors. But we get the last out, and we’re going home on a happy flight."

"No quit," Rangers interim manager Tony Beasley said. "We kept saying in the dugout, ‘Let’s just chip away, chip away.’ We fought to the end."

Detroit took a 9-2 lead into eighth before Garcia had an RBI groundout and Kole Calhoun hit a two-run homer – his first since July 9.

Down 9-5, Marcus Semien hit an RBI double off Gregory Soto and Seager hit a two-run homer. With a runner on second, Joe Jimenez fanned Garcia and retired Calhoun on a fly to deep center for his second save.

Castro had a two-run single in the fourth and a three-run double in the sixth.

Candelario hit a two-run homer in the second after rookie Kerry Carpenter had an RBI double. Candelario homered in Detroit’s 11-2 win on Saturday and barely missed another Sunday in the seventh with a double off the right-field wall.

Carpenter, who made his big league debut on Aug. 10, had his second three-hit game with two doubles and a single.

Drew Hutchison (2-7) won for the first time since July 5, pitching 5 1/3 innings. He allowed back-to-back solo homers to Seager and Nathaniel Lowe in the sixth.

Tigers rookie CF Riley Greene had two singles, two runs and a walk to raise his batting average in five games this season against Texas to .450. He made his big league debut at home against the Rangers on June 18 with two hits and two walks.

Greene is hitting everyone lately. He has multiple hits in six of his last seven games and is hitting .467.

The Tigers, who went into play last in the majors in runs, have scored six or more runs in four straight games for the first time since July 3-6, 2019 – a season in which they finished 47-114. … Seager hit his 27th and 28th home runs and Lowe his 22th, both career highs. Lowe has five in his last seven games, seven in his last 10. … Tigers right fielder Victor Reyes doubled and singled to extend his hitting streak to 12 games.

Tigers: RHP Michael Pineda (right tricep tightness) allowed two runs in five innings on Sunday with four strikeouts and no walks during what should be his last rehab outing for Triple-A Toledo.

Both teams’ next game will be Tuesday night at home. Tigers RHP Mike Manning (1-1, 2.37 ERA) will aim for his second consecutive win facing Seattle RHP George Kirby (5-3, 3.32). Rangers RHP Dane Dunning (3-6, 4.19) will make his third start against Houston this season without a decision.