Filip Gustavsson made 16 saves in net for Minnesota to improve his record to 6-4-1. Mats Zuccarello extended his point streak to eight games with a second-period goal for the Wild, who earned their third straight win.

Detroit goalie Magnus Hellberg made just his second start in net this year and sixth NHL start of his career Wednesday. He stopped 18 of the 21 Wild shots he faced. 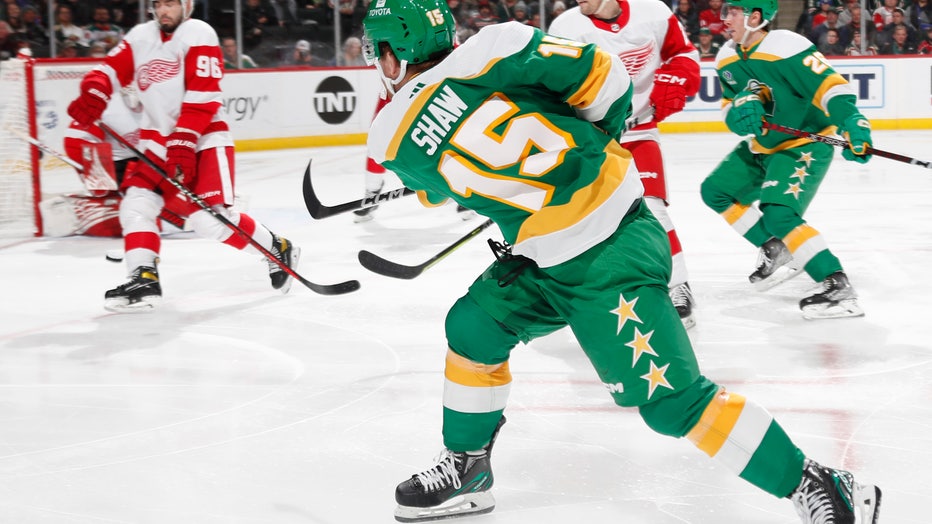 SAINT PAUL, MN - DECEMBER 14: Mason Shaw #15 of the Minnesota Wild shoots the puck with Jake Walman #96 of the Detroit Red Wings defending during the game at the Xcel Energy Center on December 14, 2022 in Saint Paul, Minnesota. (Photo by Bruce Kluckh

The Red Wings pulled Hellberg with just over three minutes remaining in the third period but couldn't break through with the extra attacker. Minnesota's Ryan Reaves missed an empty netter after Hellberg was pulled.

Wednesday's loss was the fourth in a row for Detroit.

Both teams got a goal within a 16-second span late in the second period. A Wild turnover led to a goal by Detroit’s Elmer Soderblom that made it a 2-1 game with 1:19 to play in the second. Not long after, Zuccarello fired from his knees past Hellberg to help the Wild regain a two-goal lead.

Minnesota’s Ryan Reaves didn’t end up with a point but made a few notable plays for the Wild. The veteran winger, acquired from the Rangers in a trade in late November, made a big open ice hit on Detroit defenseman Filip Hronek in the first period. Hronek remained on the ice for a minute before skating off and did not return to the game. No penalty was called on Reaves.

In the second period, Reaves earned his first fight in a Wild sweater after Ben Chiarot hit him up high. The two dropped the gloves briefly before getting broken up. Reaves, playing in his 10th game with Minnesota, pointed to his flexed bicep as he skated to the penalty box.

Gaudreau put the Wild up 1-0 in the first when he fired a shot through traffic that found the back of the net with eight seconds left on Minnesota’s power play. Dumba took a nifty backhand pass from Jordan Greenway to make it a 2-0 game at the 8:02 mark of the second period.

A fan threw an octopus on the ice late in the third period, a tradition at Red Wings home games.

Dylan Larkin, Detroit’s captain and leading scorer, did not play against Minnesota after injuring his hand Tuesday against Carolina. The team did not offer an update on his status Wednesday. Larkin has 10 goals and a team-high 17 assists in 28 games this year.