Luke Glendening had a goal and two assists, Jonathan Bernier made 21 saves and the Red Wings beat the Nashville Predators 4-2 on Saturday night. 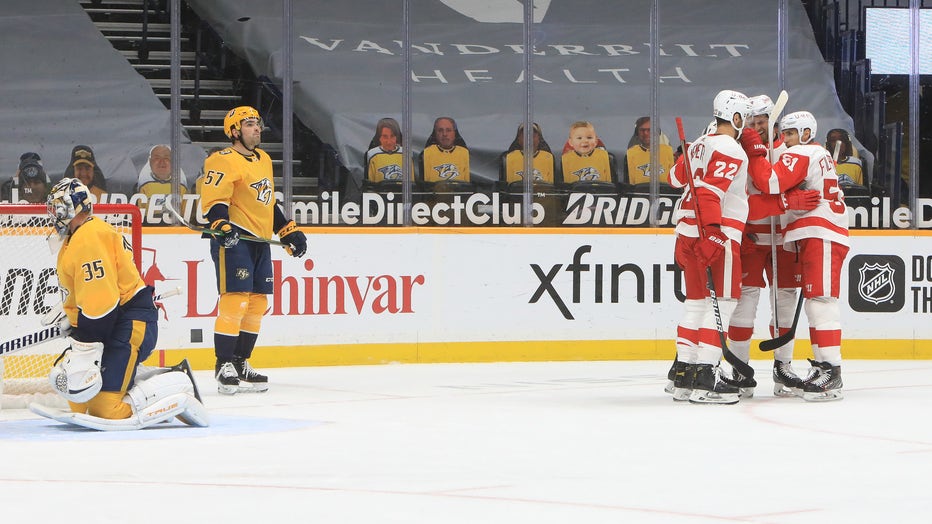 "We’ve played pretty good games in a row since we got embarrassed against Tampa," Detroit coach Jeff Blashill said. "It’s good to find ways to win."

Filip Forsberg and Rocco Grimaldi scored for Nashville. The Predators beat Detroit 3-2 on Thursday night for their only victory in five games.

"Today we were not really dialed in," Forsberg said. "Detroit came ready to play. Today they played a lot more physical than the other day and we didn’t match that at all until the third where we got going. It’s obviously not good enough."

Bernier wasn’t tested early, but he made his best save in the waning seconds of the first period when he gloved down Matt Duchene’s backhander from just to the right of the Detroit net.

"He just couldn’t believe it," Bernier said about Duchene’s reaction to the save. "I got lucky there."

Nashville managed just 10 shots on Bernier through the first two periods and the home crowd voiced their displeasure with the team as they left for the second intermission.

"We didn’t give them anything to cheer about," Nashville coach John Hynes said. "It wasn’t a good game. They come here, they pay money, they want to watch the team play well and that’s certainly understandable. The game that we put out there for them tonight didn’t deserve a lot of cheering, so that’s on us."

Fabbri opened the scoring at 4:59 of the opening period.

Valtteri Filppula carried the puck behind the Nashville net and found Fabbri with a pass on the right side, where he beat goalie Pekka Rinne with a quick one-timer. Fabbri has goals in consecutive games and in three of his last four.

Erne doubled the Detroit lead at 12:24 of the first with a backhander from the right side that deflected off of the stick of Predators defenseman Roman Josi and then went off of Rinne’s jersey.

Glendening scored his first of the season at 17:22 of the second on a backhander from the left faceoff dot that slipped between Rinne’s pads.

Juuse Saros replaced Rinne in goal for Nashville to start the third. Rinne finished with 21 saves, Saros made five in 20 minutes of action.

Forsberg was credited with his seventh goal of the season at 7:57 of the third when his pass attempt deflected off the skate of Detroit’s Marc Staal and by Bernier.

Mantha scored at 14:56 of the third, his fifth of the season, and Grimaldi concluded the scoring in the final minute of the third.

Josi and wife Ellie welcomed their first child, a boy named Luca, Friday night. It was the second baby born to a member of Nashville’s defense this week. On Monday, Mattias Ekholm and wife Ida had their second child, a daughter named Mya.

Ekholm missed Monday’s game against Tampa Bay due to the baby being born. He played Tuesday, but was injured in the game and was placed on injured reserve Thursday with a lower-body injury.

Although Bernier did not face many shots until the third period Saturday, he didn’t show any ill-effects from being out of the lineup recently. Bernier missed Detroit’s last seven games with an upper-body injury and had not played since Jan. 28.

Bernier is 3-1-0 on the season. Thomas Greiss has the other victory for the Red Wings this season.

Predators: At Dallas on Monday and Tuesday nights.