DETROIT - Thomas Greiss made 40 saves to assure the lead the Detroit Red Wings took early in the second period stood up in a 3-1 victory over the Vancouver Canucks on Saturday night.

Greiss, from Fussen, Germany, was acrobatic in goal and displayed a knack of coming up big with nearly every good chance the Canucks had to score. He received plenty of vocal support from the fans.

"It was great to do it in front of the home crowd," Greiss said in a TV interview immediately after the game.

However, Greiss also received a bit of good fortune when he needed it. Canucks left wing Justin Dowling hit the far post with a backhander with 7:26 remaining in the game. And, with only 2:31 to play, a re-directed slap shot goal was disallowed because of an interference call in front of Greiss. 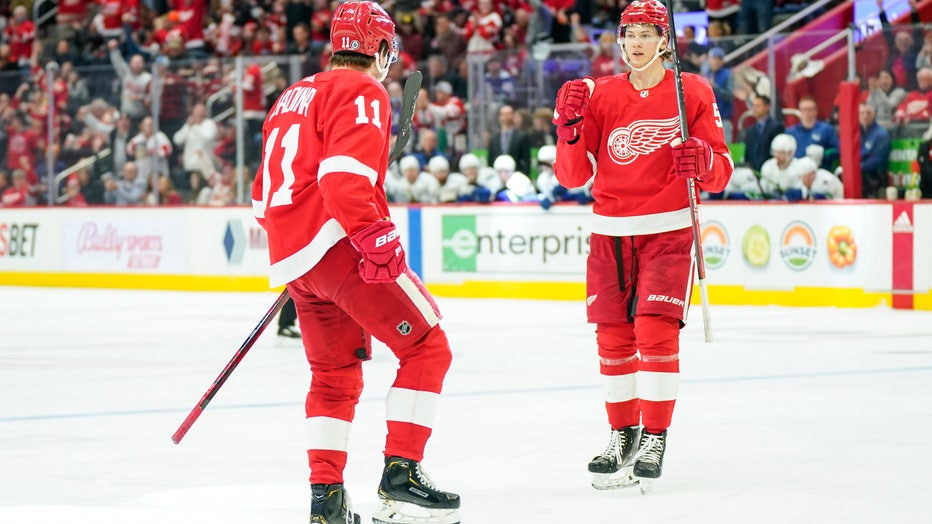 "We’re trying to win the game," said Vancouver forward Bo Horvat, "but we just couldn’t get it done. We kept the pedal down and we had opportunities, but we hit a post, we had the goaltender interference call, and he made some big saves on us from the slot.

"He’s an elite goaltender and he kept them in the game with some huge saves. In a situation like that, we need the power play to step up (the Canucks were 0-for-3 with a man advantage)."

Detroit’s Sam Gagner scored an empty-net goal with 58 seconds left to provide the two-goal cushion. Vancouver had pulled its goalie with 2:27 remaining in the third period.

Detroit jumped ahead, 2-1, with a goal at 6:42 of the second period by right wing Filip Zadina, playing sniper positioned to the left of Vancouver goalie Jaroslav Halak. Zadina, from the Czech Republic, fired a one-timer that Halak couldn’t snare with his glove to the short side of the net.

Robby Fabbri got the Red Wings a 1-0 lead with a goal at 11:05 of the first period. He redirected a shot from defenseman Marc Staal past Halak and defenseman Gustav Lindstrom also received an assist.

It was the first goal of the season for Fabbri, who was centering Detroit’s No. 1 line in the absence of captain Dylan Larkin.

Larkin was serving a one-game suspension after being ejected in the Red Wings’ season-opening 7-6 overtime loss to the Tampa Bay Lightning on Thursday night. He was ejected for taking a match penalty by punching Mathieu Joseph in response to being driven, head-first, into the boards.

Vancouver evened the score, 1-1, on a power play goal early in the second period by right wing Conor Garland with assists to his No. 1 line center Horvat and left wing Tanner Pearson.

"They are easy guys to play with," said Garland.

It was Garland’s first goal of the young season, but Detroit regained the lead less than two minutes later on Zadina’s tally at 6:42 of the middle period.

Greiss made sure the Red Wings stayed ahead shortly after that goal. He went down to make a quick pad save before smothering the rebound with his glove.

"Their goalie was pretty good," said Vancouver coach Travis Green. "We had a lot of chances. We probably with this game eight out of 10 times."

It was a spirited contest that featured several scrums and penalties for fisticuffs.

"It felt like a playoff game out there," said Horvat. "It was heated."

This was the first game between the teams in nearly two years and it was the first time the Red Wings hosted a Canadian opponent since Feb. 23, 2020 (Calgary). ... Greiss extended his career-best unbeaten streak to 10 games, dating back to April 4. He’s allowed two or fewer goals in nine of his last 11 decisions.

Canucks: travel to Buffalo for a game Tuesday.