DETROIT - Oscar Gonzalez knocked in the go-ahead run with a two-out single in the 10th inning and the Cleveland Guardians extended their winning streak to five games, beating the Detroit Tigers 4-3 on Thursday.

Gonzalez's hit off Gregory Soto (2-7) allowed the Guardians to escape after they squandered a two-run lead in the ninth.

Cleveland reliever Trevor Stephan opened the ninth by allowing a walk, a single and Jonathan Schoop’s RBI double that got Detroit within 3-2. Enyel De Los Santos (3-0) came in with one out and gave up Eric Haase’s tying fielder’s-choice grounder.

Bryan Shaw worked the 10th for his first save of the season. 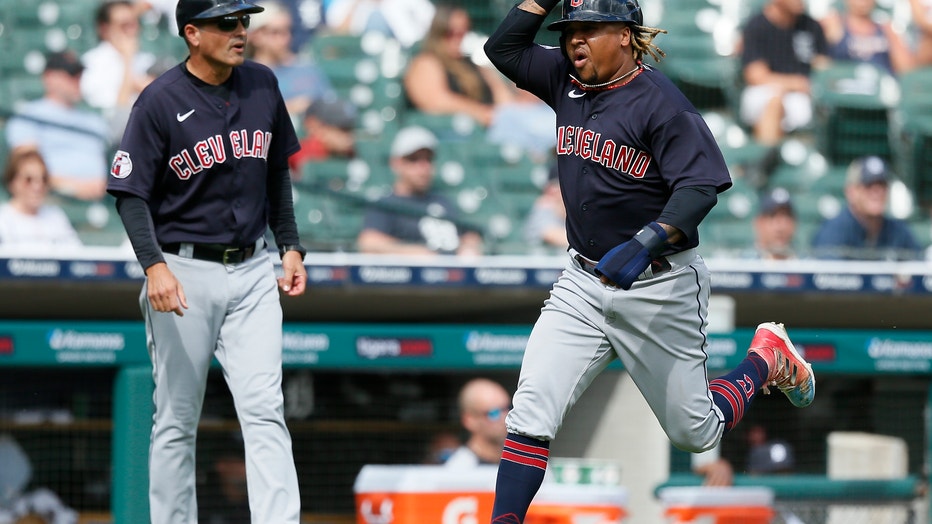 DETROIT, MI - AUGUST 11: Jose Ramirez #11 of the Cleveland Guardians runs past third base coach Mike Sarbaugh #16 to score and break a 3-3 tie against the Detroit Tigers during the 10th inning at Comerica Park on August 11, 2022, in Detroit, Michigan

The AL Central-leading Guardians increased their lead over idle Minnesota to 1 1/2 games.

Cleveland starter Zach Plesac limited Detroit to one run and four hits while striking out seven in 6 1/3 innings.

Javier Báez hit his team-leading 11th homer for the Tigers but also committed two errors at shortstop. Willi Castro had three hits and scored a run.

A throwing error by Báez allowed Cleveland to score its first run during the second inning.

The Guardians got another unearned run in the fourth after an error by third baseman Willi Castro. Luke Maile drove in Gimenez with a two-out single.

Kwan hit his third homer this season to lead off the fifth. Detroit broke through on Báez's two-out homer in the sixth.

Guardians: RHP Peyton Battenfield will be recalled from Triple-A Columbus and RHP James Karinchak will be placed on the restricted list. Karinchak cannot travel to Toronto for this weekend's series because he is unvaccinated.

Tigers: LHP Daniel Norris will be recalled from Triple-A Toledo and start the opener of a three-game series at the Chicago White Sox on Friday. Norris, who was traded by Detroit to Milwaukee last year, was designated for assignment by the Chicago Cubs last month. The Tigers signed him to a minor league contract on July 26.

Guardians: RHP Cal Quantrill (8-5, 3.88 ERA) will start the opener of a three-game series at Toronto on Friday. Quantrill tossed six scoreless innings against Houston on Saturday while notching his fourth victory in his last six starts.

Tigers: LHP Daniel Norris (0-4, 6.90 ERA) will start Friday's series opener at the White Sox. He has made two starts for Triple-A Toledo since being signed to a minor league contract, allowing two runs in 6 2/3 innings. He has a career 4.59 ERA in 139 games (77 starts) with Detroit.